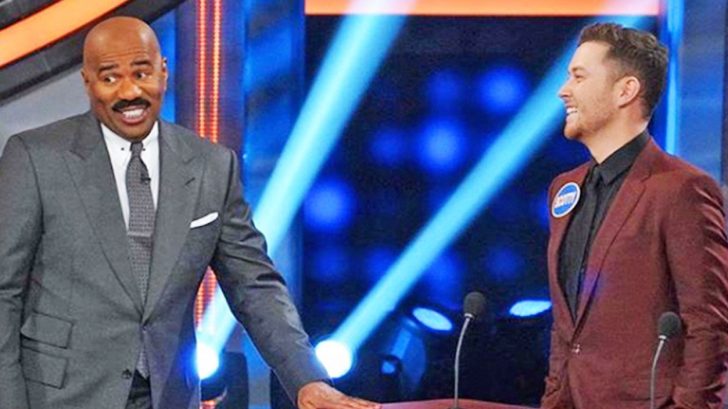 We never in a million years thought we’d ever hear the names Chris Kattan and Scotty McCreery in the same sentence. Kattan is a comedian/actor best known for his tenure on Saturday Night Live, and McCreery, as we all know, won the tenth season of American Idol and has been releasing incredible songs like “Five More Minutes” and “This Is It.” So what are these guys doing together?

Well, they were the latest competitors on the fan-favorite game show Celebrity Family Feud!

Each celebrity brought along their families to play the game show that thrives off hilarious off-the-cuff answers, and it’s all for a good cause! McCreery, his then-fiancée Gabi, his dad Mike, his grandma Paquita, and Gabi’s dad Merrick competed against Kattan’s family on a 2018 episode.

Country Music Star Scotty McCreery and his kindergarten sweetheart are ready to play the feud tonight at 8|7c!

The episode was filmed before Gabi and Scotty’s June 16, 2018 wedding, which is why some of the things host Steve Harvey says to the Idol champ may seem a little dated.

Scotty and his family did well enough on the show to make it to the Fast Money round, where Gabi answered the series of questions first, then Scotty followed. If they accumulated 200 or more, they would win $25,000 to be donated to St. Jude’s Children’s Research Hospital.

Introduced my man Steve to the fam? Celebrity Family Feud! Tonight @ 8 on ABC??

Gabi did a great job during her Fast Money Round, earning 140 of the 200 points herself! Scotty only had to get 60 points for them to win the money. Luckily for him, he gave some good answers, but he said two that were absolutely hilarious – and one that was so Southern, it made Steve say, “My man!”

“What is something you saw, and immediately said, ‘I’ll take it’?” Steve asked.

With little hesitation, Scotty said, “Fried chicken,” which got a huge laugh from his family, everyone in the audience, and even us!

Scotty’s answer to the question, “Name something you think of when you hear the word ‘Boo’.”

“Yah,” the “This Is It” singer responded, referring to the phrase “Booyah!”

Scotty and his family probably said “Booyah,” when they won the $25,000 after only needing three of Scotty’s answers. Shockingly, his fried chicken answer did earn them eleven points!

Watch the full clip below, and get ready to giggle!