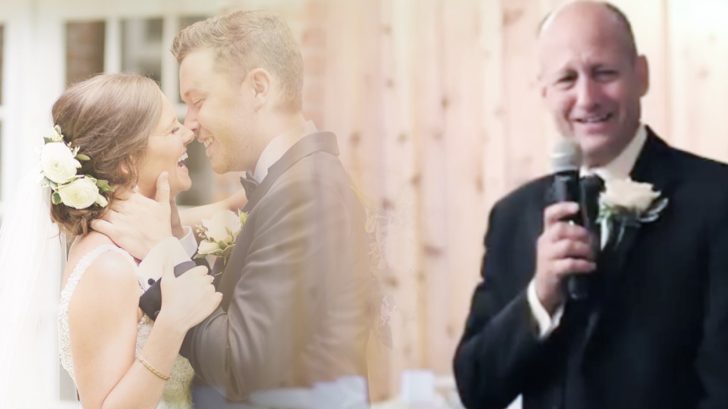 Following his fairytale wedding, Scotty McCreery released a heartwarming video of his wife’s father giving a tear-drenched speech – and it’s the perfect example of fatherly love.

Without a doubt, this in-law situation is probably one of the best we’ve seen. McCreery had been dating his now-wife, Gabi Dugal since high-school. Even though he’d known her parents for years, he still said asking for their blessing was nerve-racking.

He told Taste Of Country, “That was a really nerve-racking. I drove up to the cul-de-sac and said ‘nope’ and drove right around and made the loop and gathered myself and then drove up there… I was probably a little late because I had to gather myself.”

Fortunately, Gabi’s parents’ gave him their blessing and he proposed to her not much later. The proposal itself was beautiful. He got down on one knee while hiking to pop the question. After she said yes, the couple met up with the rest of the family for an elegant dinner celebrating the event.

Today was a dream ??? I SAID YES!!! Can't wait to spend the rest of my life with you eeeek ???? #I'mafeyoncé #bestfamilyever #soinloveeee

The two were married up in the Blue Ridge Mountains. Their North Carolina wedding included a gorgeous Morilee gown, traditional style cake, and 200 friends and family showing their support for the newlyweds. McCreery wrote his song “This Is It” for Gabi and beautifully put scenes from the wedding into the music video.

As with all weddings, there were a few moments where the tears came from laughter. One moment being this adorable — between McCreery and Mr. Dugal where McCreery is jokingly warned that dad is still watching over his little girl.

While the “This Is It” video captured some beautiful moments – others were left out. And after realizing how much fans loved the video and wanted more, McCreery leaked some special footage from the day. He posted to Instagram the Father of Bride’s “Welcome” speech… which left us in tears.

The priceless moment starts with Gabi’s dad welcoming the 200 guests to the celebration. He tells them that the theme is “This Is It” and gives McCreery look of affirmation. In return – you can see the appreciation and respect McCreery has for Mr. Dugal.

Mr. Dugal continues, “Many years and here it is – it’s finally here. Mimi and Papa… love these types of things, would have lived for this.” Already choking up, he pushes through saying,“Thank y’all so much for this special moment, we thank God for the blessings that he’s given us… I mean, how do I deserve this? Two beautiful daughters.” No longer able to hold back the tears he lifts his arm towards McCreery and his new wife saying, “I mean, everything I have.”

It is obvious that Mr. Dugal sees gaining McCreery as a son-in-law as another one of life’s blessing.

You can watch the Father of the Bride’s speech below and feel the full level of emotion in this beautiful video.