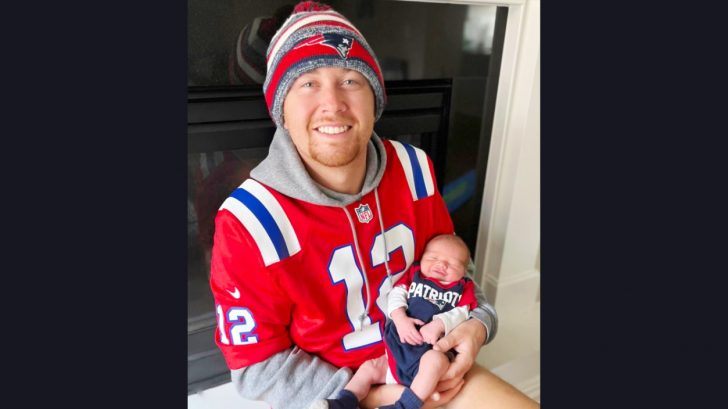 When Scotty McCreery found out he and his wife, Gabi, were having a baby boy, he couldn’t wait to introduce his son to all of his favorite sports. He told Audacy‘s Rob + Holly he was incredibly excited to teach his son about baseball and golf:

“…just because that’s such a huge thing for me,” he said. “Baseball… Gabi’s gonna give him a soccer ball because she’s great at it. Golf, all that stuff…”

Scotty was also looking forward to enjoying the NFL season with his son. He’s been a lifelong fan of the New England Patriots, which from the surface may not make sense, because Scotty grew up in North Carolina.

But as Scotty explained on The Ty Bentli Show in 2019, his love for the Patriots was passed down from his father, who is from Boston. “It’s just what was born into me,” he said.

When the Patriots learned Scotty and Gabi were expecting, they sent their son his first jersey. Scotty thanked the team for the kind gift and shared a photo on social media.

Baby Avery got the chance to spend his first NFL Sunday with his dad on October 30. Scotty shared a cute photo of him and Avery rocking their matching Patriots gear, and captioned it, “Avery’s first NFL Sunday! Go Pats, buddy!”

You can see the adorable photo of Scotty and Avery below.