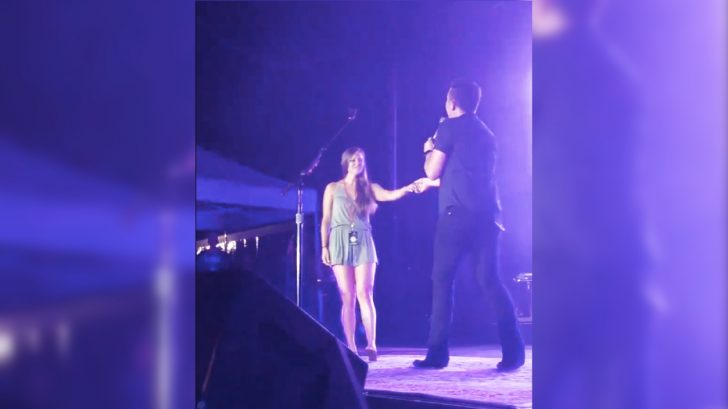 This country music star decided to show some love for his wife in front of an entire audience – and it was beyond sweet. Even more adorable, is the story behind the song and why he brought her up on stage…

Scotty McCreery married high school sweetheart, Gabi Dugal in 2018 after dating for six years! They had their fairytale wedding in the Blue Ridge Mountains of North Carolina, surrounded by nature’s beauty. It was so perfect – he decided to use footage from the big day for his “This Is It” music video!

Seeing McCreery’s face as his wife walked down the aisle could bring even the toughest guys to tears. No wonder it has reached over 8 million views. And if his wedding music video wasn’t sweet enough, McCreery decided to go one step further to show his love for Gabi with an unexpected public display of affection.

During a recent concert, he brought his blushing bride on stage to serenade her with the song. Fans went crazy as he pulled her to his side and she looked up at him with loving eyes. Then, without notice – he showed everyone just how much he loves this lucky lady.

Gabi seemed unaware of what was going to happen next. But, as the show went on – he spun her around and gave her a big kiss.

McCreery told the crowd, “Y’all say hey to my wife, I couldn’t be here without her.” She then walked off stage with a huge smile on her face that definitely lasted the rest of the night.

McCreery wrote “This Is It” back when he was getting ready to ask for Gabi’s hand in marriage. When he first released the single, he told fans, “Hope y’all love it as much as I loved writing it for her.” It quickly made its way to the top 10 on Billboard and has been loved by couples everywhere.

My engagement song for @GabiDugal, and my new single “This Is It” is out now??? Hope yall love it as much as I loved writing it for her. Link in bio.

As for the newlywed couple, they enjoyed a blue water honeymoon in Bora Bora and have been going strong ever since. McCreery even told People that his new favorite words are “my wife.”  It looks like they have found their “happily ever after.”

Jet skiing around Bora Bora… Awesome. Finding out what you ordered for lunch was LIVER, after you ate it… Priceless

We can’t get enough of this sweet couple!