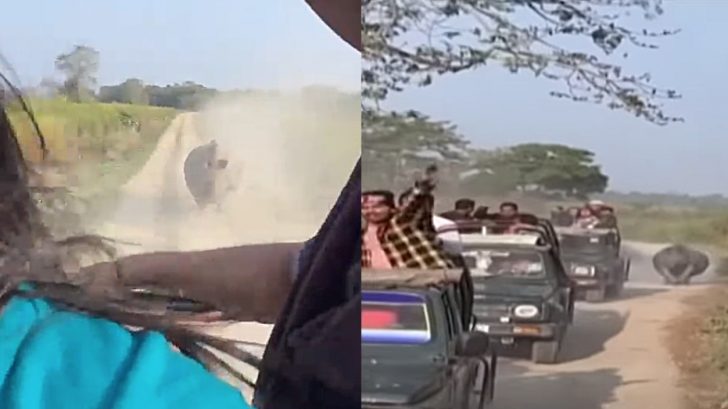 On Dec. 30, 2022, tourists filmed some hair-raising videos of rhinos aggressively chasing visitors who were visiting some of the best Indian safari parks.

The first video was filmed in the Manas National Park in Assam and showed a rhino charging after tourists who were riding in the vehicle down an old dirt road in the middle of a heavily forested area.

Even with the vehicle moving at a fast pace, the animal was able to stay right on their tails. The rhino followed them for a good half-mile for over half a minute in the video.

The tourists can be heard shouting and screaming at the driver as they sat in the back of the vehicle and feared for their lives every time they looked back and spotted the thousand-pound animal near to them.

Fortunately, the rhino got tired and stopped chasing and was left in the dust on the trail.

This is called RHINO CHARGE – Again tourist safari jeep chased by Rhino at Kaziranga, shouts of speed.. speed..Bhaga… Bhaga.. says it all. pic.twitter.com/SnWjREm2u7

Another video posted on Twitter on Dec. 31 of a rhino chasing a group of tourists occured at the Kaziranga National Park in Assam. The tourists can be heard screaming at the driver “bhaga” – meaning “speed up.”

In this video, it appears the vehicle was having difficulty maintaining top speed to stay away from the rhino.

The authorities said that there were three jeeps trying to outrun the rhino and the animal ended up brushing the tires of the rear of the jeep.

Fortunately, no one was reported hurt during either incident. Just a lot of sheer terror was visible on their faces every time they looked back at the animal.