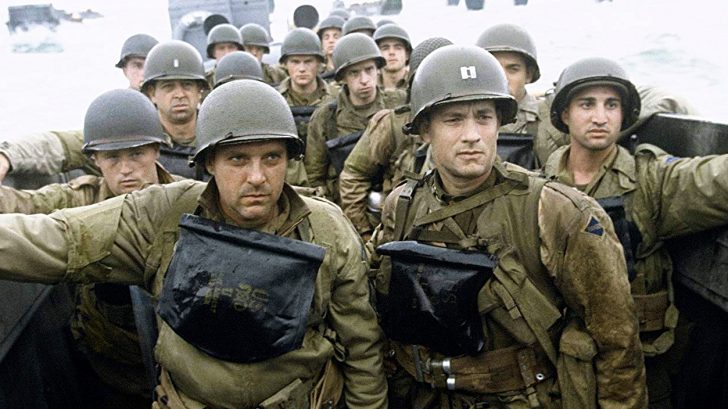 Called “one of the greatest cinematic achievements” and truly one of the most iconic films about World War II, Saving Private Ryan was an instant classic after its release back in July 1998.

Directed by the one and only Steven Spielberg, the movie tells the story of Private First Class Ryan – who is the last surviving son of his family, as his three brothers were killed in action while fighting for their country. Set during the Normandy Invasion, just three days after D-Day, a small group of soldiers are sent orders to bring Ryan back and they set out on the mission.

20/20: The story of the Niland brothers is another remarkable chapter in our World War II history. The story was significantly altered for "Saving Private Ryan," but the basic elements remain unchanged. Thanks for following along with us. We'll now take any questions. pic.twitter.com/qqJrtG4nWl

Back in 1998, Saving Private Ryan became the highest-grossing movie of the year both in the United States and worldwide. Additionally, it grossed a mind-blowing $44 million in the days following its release on home video.

To say that it was anything short of a blockbuster hit would be a lie.

The movie has been lauded by critics as one of the most influential films in the war genre and has often been credited for renewing interest in World War II worldwide. In 2014, the film was even chosen for preservation in the National Film Registry by the Library of Congress. It was chosen because it is considered to be “culturally, historically, or aesthetically significant.”

“We contributed to the movie, but in no way would I want to take away what they achieved physically and viscerally … I think that #SavingPrivateRyan changed the way that modern war movies are made.” – Roger Guyett, co-visual effects supervisor #SavingPrivateRyan20 pic.twitter.com/S8TMJ1Fiy4

Now, 21 years after its release, Saving Private Ryan will return to theaters for just two days only. Decades after it stunned audiences across the world and ushered in a new era of cinematography and deepened interest in our past – we will all be able to see it again, as it was intended, in a proper movie theater.

Releasing to just 600 movie theaters nationwide, Saving Private Ryan will only be showing for two days: June 2nd, 2019 and June 5th, 2019. Those dates commemorate the 75th anniversary of the June 6th, 1944 landing of Allied troops in Normandy.

The film, which stars Tom Hanks, Matt Damon, Tom Sizemore, Barry Pepper, Edward Burns, and many more will be shown by Fathom Events in a select group of theaters.

To find out where it will be shown near you, visit the Fathom Events page and type in your zip code. You will be able to see results for both dates.

Watch the clip below from Smithsonian about the Niland brothers and the story that inspired Saving Private Ryan.