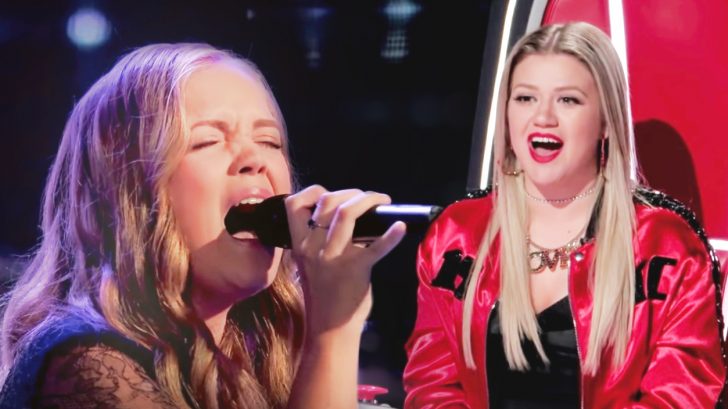 Season 16 of The Voice featured a Janis Joplin cover worthy of a superstar’s praise. The singer showed amazing vocal range and class – oh, and did we mention? She was only 15 at the time!

During her Blind Audition, Sarah Grace stunned judges right off the bat with her powerful vocals as she belted out Janis Joplin’s “Ball and Chain.” After flawlessly hitting every note in the first few lines of the song, this fierce 15-year-old got Kelly Clarkson to spin her chair around first. When Clarkson saw how young the singer was, a huge smile took over her face.

If you don’t remember, Clarkson won her first season on The Voice with Brynn Cartelli – another high school student with a killer voice.

While Clarkson might have hit her buzzer first, two other judges joined her when they recognized just how much control Grace had over her vocal range. To their surprise, the tiny teen not only had a fierce voice but a feisty stage presence as well! After finishing on a high note, it was time for the judges to make their case as to why Grace should pick them as a coach.

Clarkson attempted to snag the young singer with the promise of a new “Team Kelly” jacket and explained that Grace had “stank face for days.” Luckily, Jennifer Hudson avoided any hurt feelings and explained that this meant the girl had “sass.”

While Hudson and Clarkson fought over Grace by complimenting her “big, old soul voice” – Blake Shelton took a very different approach. He felt it all had to do with height saying that “For me to turn around and see that your 15 years old and you’re this tall – you gotta pick me just so we can see the photographs together.” Blake is 6’4 while Grace is only 4’11!

Each judge made their case for why they would be the best judge – and there was no shortage of horsing around and friendly teasing. She ended up choosing Team Kelly and made it pretty far in the competition! Watch her incredible, jaw-dropping audition below.