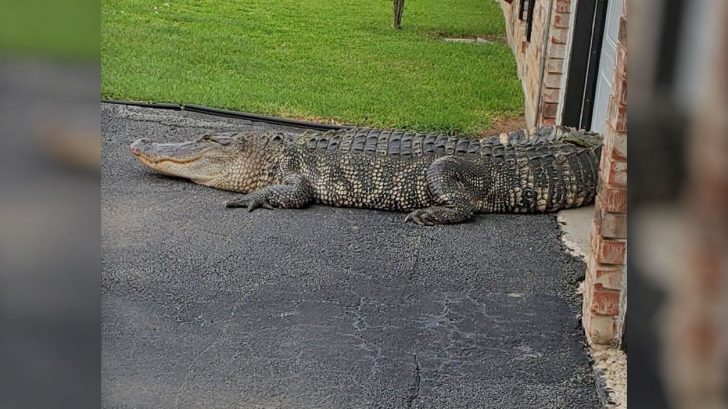 News anchor for News 4 San Antonio and Fox San Antonio, Ashley Sutton shared a photo on Facebook Tuesday, June 30, 2020 of a large alligator that her aunt and uncle woke up to. According to her, the two of them woke up in their Southeast Side neighborhood near Calaveras Lake to find the giant alligator hanging out in their driveway.

Ever seen a gator in San Antonio, much less one this big? My aunt and uncle woke up and found this guy in their…

“Big alligators are notoriously difficult to age, but we definitely know that’s an older male, it looks to be around the 10-foot size class I’d say.”

According to Warner, the alligator was previously spotted in the area a few weeks ago.

“I think it was initially sighted in a small pond behind a church and then, from its movement we’ve seen, the information the wardens have given me there, it looks like it’s making its way back to the lake. I believe that house where it was in the driveway is about half a mile from the lake.”

There are no reports of the gator bothering anyone but Warner cautions people,

“Stay away from them, enjoy the sighting when you see them and just use common sense. Don’t swim in areas with alligators at night with dogs or small children.”

A bite from an alligator like the one this couple found could be deadly.

Watch the video below for more information on alligator bites.