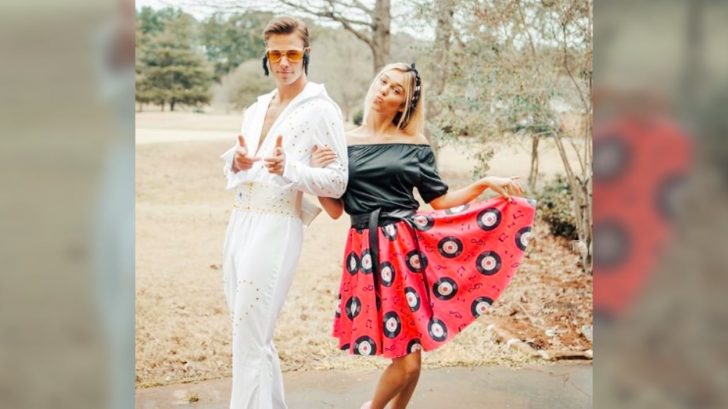 On January 11, 2019, Rebecca Robertson and her husband John Reed Loflin, welcomed their first child, a son they named Zane. The little fella was surrounded by love from the moment he came into the world.

The entire Robertson family has fawned over Zane, especially since he is Willie and Korie’s first grandchild. If you look on any of the family members’ social media accounts, you’ll find they all love sharing photos of Zane with their followers.

So in honor of her son’s first birthday, Rebecca posted a special photo on Instagram. She said the picture was inspired by a friend who takes a picture of her child every year at the exact time of birth.

Rebecca and John Reed did the same thing with Zane, even though they were traveling in Taiwan at the time. They made sure to set their alarms correctly to account for the difference in time zones!

1.11.2020 1:27am One of my friends takes pictures every year at the same time that her child was born. I thought that was the sweetest way to remind ourselves of such a special moment. We decided to take a picture today at the same exact moment when Zane was born, after the earth made a full circle around the sun. This moment changed our lives forever ? Swipe to see quite the difference from a year. So special to be in the country where I grew up with Zane on his birthday! ? ( zoom in to see the time on my phone, a little confusing because of the time difference in Taiwan, but we got it after setting about 10 alarms lol )

Since the Loflins were overseas on Zane’s actual birthday, they threw his first birthday party after they returned home to Louisiana.

The Robertsons turned out to celebrate Zane during his Elvis-themed party. Rebecca posted a bunch of adorable photos from the happy day, which show Zane dressed up in a tiny jumpsuit much like the ones Elvis became famous for wearing.

Zane wasn’t the only one who dressed up for the party. All of the guests donned 50s-style attire, or simply dressed as “The King” himself.

Just got the pictures back from Zane’s Elvis theme birthday party! It was so much fun and everyone dressed up in 50s theme! I will share more in the next post. the 10 picture post limit on Instagram just aren’t enough to show all the fun we had! ???❤️ #firstbirthday #1stbirthdayparty

Well, it's ONE for the money • two for the show three to get ready now go, cat, go but don't you step on ZANE’s blue suede shoes ???❤️? #ZaneIsRockingOne #firstbirthdayparty

As you scroll through the above slideshows, you’ll catch a glimpse of Rebecca’s sister, Sadie, with her husband, Christian Huff. The couple went all-out when it came time to dress up for their nephew’s birthday party, and fully embraced the Elvis theme.

Sadie donned a 50s-style skirt that had records and music notes printed on the fabric. As for Christian, he channeled his inner Elvis and wore a white, bedazzled jumpsuit.

He topped off the look by adding a pair of large, gold sunglasses and a set of fake sideburns.

Sadie posted pictures showcasing what she and Christian wore to Zane’s birthday party. Rebecca took to the comments to compliment their outfits, saying “Best dressed award goes to the HUFFS!!!”

You can see Sadie and Christian’s cool costumes in the below slideshow.

we are the Huffs and we show up to a party ?? (Aka cutest party ever for the cutest little 1 year old – way to go @rebeccalorobertson you rock the mom life)

We have to agree with Rebecca, the Huffs dressed to the nines for their nephew’s first birthday party!

The couple also got all dressed up for their November 2019 wedding. Sadie wore not one, but two dresses that day, opting to change into a different dress for the latter part of their reception.

You can learn more about the Huffs’ romantic wedding by tuning in to the video below.

Between the holidays and Zane’s birthday, Sadie and Christian have been able to celebrate so many fun things in their first few months of marriage!