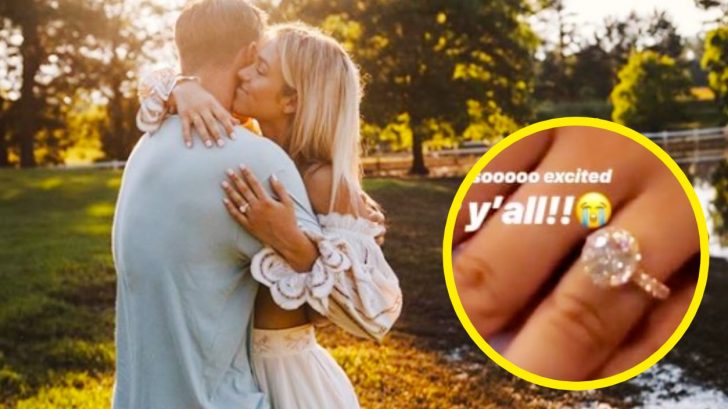 Just days before her 22nd birthday, Duck Dynasty‘s Sadie Robertson got the gift of a lifetime when her boyfriend, Christian Huff, dropped to one knee and asked her to marry him.

“I screamed YES,” Sadie wrote alongside a video she shared of Christian’s romantic proposal.

I screamed YES. so many words and so many more pictures to come, but for now just know my friends I’m the happiest human in the world on June 9th, 2019 today and for the rest of my life. I GET TO MARRY THIS MAN. God is faithful and so so good♥️

In the days that have followed since that magical moment, Sadie, her friends, and family continued to relive it by sharing sweet photos taken on the day of her engagement.

Many of those photos showcase her gorgeous rose gold ring, which features a round, center stone surrounded by a halo of diamonds.

our best girl is getting married…. TO OUR BEST FRIEND. best day ever !!! love you both, more than you know!!!

Sadie’s getting married!!!!! To the most amazing man, and we are beaming!!! Today was an absolute dream. I love every second of being @legitsadierob mom and can’t wait for @christian_huff to join the fam! ❤️

When your bday party turns into an engagement > WELCOME TO THE FAM @legitsadierob ??love you & @christian_huff so much. BEST IS YET TO COME #hedidthedangthing

But there’s one important detail about Sadie’s ring that you can’t see in pictures. And if she had never said anything about it, you never would have known that it’s there!

Those who know Sadie well know that the word “original” means a lot to her. It all started when her dad, Willie, called her “The original” when she was younger.

As Sadie grew older, she adopted the phrase “live original” as her brand, with her popular speaking tour and one of her books being named after the phrase.

The word means so much to her that Sadie even got it tattooed on her arm in tiny cursive font. She only has one other tattoo, and it is the word “fearless.”

Knowing how much the word “original” means to his future wife, Christian had the word engraved on the inside of her engagement ring. This is something that Sadie shared in an Instagram post, otherwise you never would have been able to tell that little detail is there!

“He engraved in my ring the word ‘original,'” Sadie wrote. “That to me was so intentional and not only made me feel so loved, but made me feel so known. He knows who my original self is and he is promising to love that version of myself forever.”

You can read Sadie’s full post about her hidden ring detail and the importance of intentionality in her relationship with Christian below.

we just did a q&a at our church today and Christian said, “intentionality is rooted in love.” He shared about how he feels most loved when we are most intentional, and it made me think about the concept of being fully known to be able to be fully loved. He engraved in my ring the word “original.” That to me was so intentional and not only made me feel so loved, but made me feel so known. He knows who my original self is and he is promising to love that version of myself forever. This kind of love makes the verse about no fear in love seem possible. It takes the pressure off having to measure up to something worth the concept of love, and just accept being loved for where i am and in who i am. God who originally created us, uniquely made us, fully knows us – intentionally loves us. The Bible says no one has ever seen God, but we see HIM through the way that WE love… I’m seeing it pretty beautifully right now and wanted to share☁️♥️?

Want to learn more about why originality means so much to Sadie? Then check out the video below.

It’s clear that the word “original” has been meaningful to Sadie for so long. And it’s clear that Christian knows her well, since he made it part of her engagement ring!