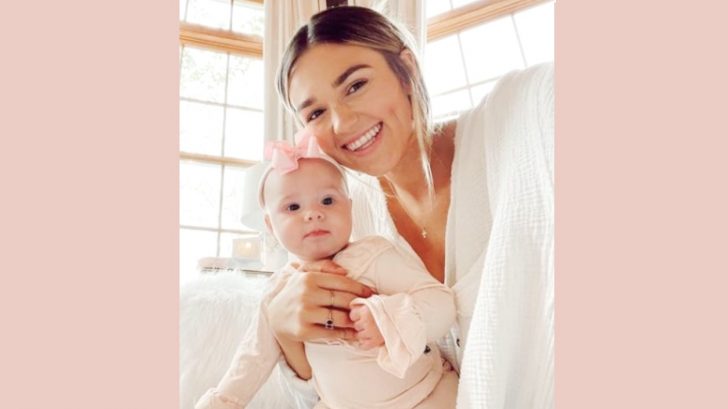 Just a few weeks before she gave birth to her baby girl on May 11, Sadie Robertson revealed the name she and her husband, Christian Huff, had chosen for her…Honey James Huff.

Sadie took to Instagram to explain the meaning behind her daughter’s name. She said it was inspired by Proverbs‬ ‭16:24.

“I’ve always loved this verse,” Sadie wrote. “Its [sic] made me have a love for the idea of all that honey is. It’s a sweet delicacy with a strong healing component. When Christian and I started dating we went through the book of Proverbs together and I remember getting to chapter 16 and as I read verse 24 i said to him, ‘you have words like honey. they are so sweet and are healing places in my heart I didn’t even know needed to be healed.'”

Now, baby Honey is here, and it’s hard to imagine her name being anything else!

But as Sadie and Christian confessed in a vlog on their YouTube channel, they originally thought about giving Honey a different name. And they revealed what that name was!

The vlog cut to a clip of Sadie and Christian in Jackson Hole, Wyoming. “We love Jackson Hole,” Sadie said, even though they had only visited one other time.

That visit was a special one though, as Christian blurted out that they conceived Honey on that trip. That’s when an embarrassed Sadie admitted that because of their connection to the city, they first thought about naming Honey “Jackson” if she was a boy.

“…Let’s just say, if Honey was a boy his name might be Jackson,” Sadie said.

But Honey was a girl, which is why they put the name Jackson to the side and chose a different one instead. Though who knows, if they have a son one day they may end up naming him Jackson!

Tune in below to hear Sadie and Christian explain why Honey would have been named Jackson if she was a boy. Watch the vlog all the way through to see some cute clips of their little family!