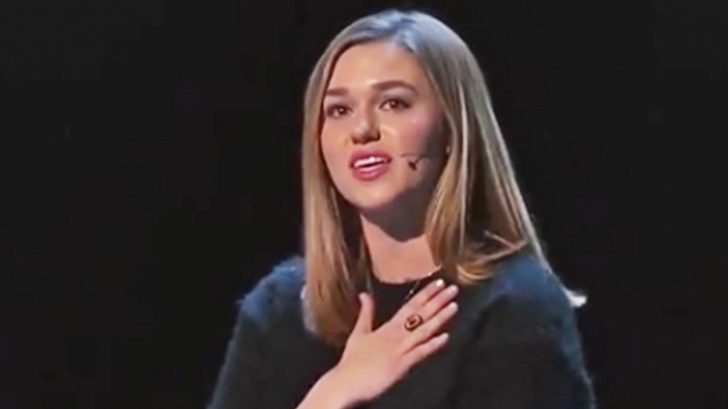 Duck Dynasty star Sadie Robertson is an open book. In fact, she’s two open books. The 20-year-old Dancing With The Stars runner-up is now the proud author of two books, her 2015 New York Times best-seller Live Original: How the Duck Commander Teen Keeps It Real and Stays True to Herself and the recently released Live Fearless: A Call to Power, Passion, and Purpose.

She also frequently posts on social media and writes on her blog, diving into some of her most personal details with her fans. In a blog she posted on September 1, 2017, Robertson let us in on a secret she had been keeping for a long time – she had previously battled an eating disorder.

It began after she appeared on the ballroom dance competition show, when she was in the best shape of her life. During the show’s filming, she was training non-stop for three months straight and suddenly stopped when it was all over. It was then that she began putting weight back on, which is completely normal, but she began to secretly began to skip meals.

“At least five times a day, I would wrap my hands around my thighs, making sure they hadn’t grown beyond what I could reach,” she wrote. “I knew each little calorie that was in every bite of food I took. I talked about food all of the time. I hid behind the talk, and I actually hid behind encouraging others.”

If you follow Robertson on social media, you know that it looks like she’s in a great place in her life. She is living in Nashville, Tennessee surrounded by an incredible group of friends, with family not too far away.

Thanks to her recent interview on the Hollywood Life podcast, we now know that her eating disorder is cured, but it took her hitting rock bottom for her to get there.

“For me, it was hitting rock bottom and it was a wakeup call. Honestly, it was the day that my boyfriend and I had broken up and it had nothing to do with him. But it was just the moment that I was really broken and I was really upset,” she said, likely referring to her March 2016 break-up with Blake Coward after almost three years together. “I remember that day. I was like crying and I looked in the mirror and I literally couldn’t even recognize myself because I actually saw myself for who I am and I actually saw myself for the first time. I believe, for who God created me to be.”

In her September blog post, she revealed that she had heard people develop eating disorders because it’s something they can control, which she completely related with.

“It was such a mind thing, honestly,” Robertson told Hollywood Life.  “You’re constantly thinking about not eating. It’s totally consuming you. You’re thinking about what other people will think of you. You’re way overexercising to the point that it’s just exhausting. You skip meals all the time. You don’t want people to see you eat. Then you have anxiety about eating and it is a full on mind game and problem and it’s all consuming. The minute I came out about it and the minute I just began to tell people about it, it’s just been amazing because, first of all, I’m freed of it and, second of all, other people are finding freedom of it. When you’re in that, when you’re in an eating disorder or fear — anything like that — there seems to be no way out, but there is. I feel like even my duty in humanity is talk about it and get people out of it.”

Now, Robertson speaks all over the country about her struggles, writes about them, and encourages other young people that are facing theirs. The almost 21-year-old is a living proof that you can overcome anything. Watch her talk about living fearless in the video below.