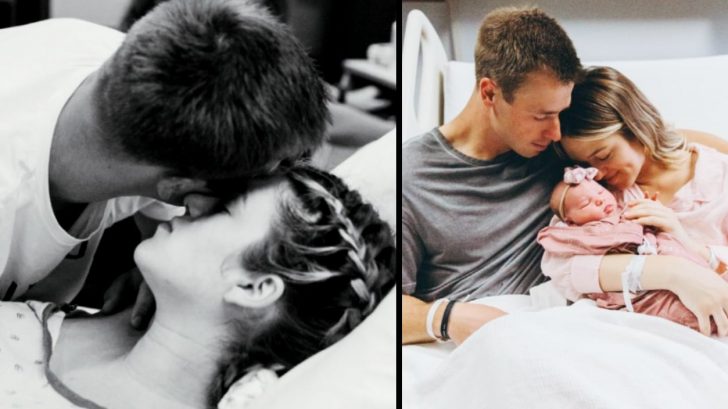 “we saw a million little miracles yesterday – the best one being this girl right here… Honey,” Sadie wrote alongside a slideshow of some of Honey’s first photos.

Sadie also alluded to the fact that Honey’s birth was a difficult one. “the pure goodness of God.
story to come, but I’m way too occupied right now by cuteness,” she said.

Just shy of two months after Honey arrived, Sadie was ready to open up and share Honey’s birth story. In a video she shared on social media, Sadie said how she had always intended to have an unmedicated birth. She thought her water would break, and she’d labor for a little while at home with the help of a doula before going to the hospital.

But, nothing went according to Sadie’s plan.

A complication arose during labor that resulted in a terrifying couple of minutes. Sadie detailed what happened, saying:

“So I go to push and everything gets crazy. All of a sudden, I was pushed down on the bed and they pushed my mom out of the way, and every nurse in the room was just over me and they’re pulling my legs and pushing my stomach as hard as they could and honestly I didn’t know what happened. I thought they…cut me open…because of how painful it was when they pressed on my stomach. I now know they were pressing my pelvic bone to get her out because what happened was Honey got stuck.”

Sadie said Honey’s shoulder was stuck in the birth canal. This doesn’t happen during many births, as Sadie said:

“So her shoulder actually got stuck, which is really, really rare. Since then, we found out that only happens in about 1% of births, and it’s what our nurse said that is the scariest thing that can happen…“

Because Honey was stuck, the shoulder was putting pressure on umbilical cord, cutting off her air supply. Sadie said “time stood still” as the doctor attempted to break Honey’s shoulder in an effort to get her out.

“…they couldn’t get her out for two minutes and 10 seconds,” Sadie said. “So, this really was very scary and really dangerous.”

Finally, after another push, Honey was born. She wasn’t breathing at first, and the nurses were ready to rush her to the NICU.

Thankfully, Honey started breathing on her own, and was perfectly fine. Much to the medical team’s shock, her shoulder was unharmed even though the doctor had tried to break it to free her from the birth canal.

“She was so strong,” Sadie said of her daughter.

Now, Honey is here, and she’s growing up so fast!