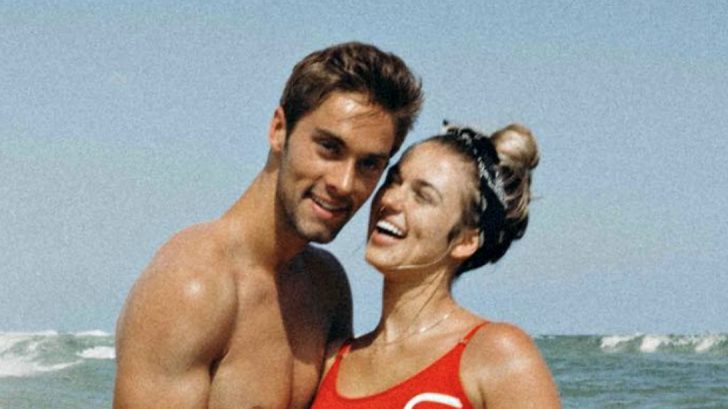 It’s been just over a month since Duck Dynasty star Sadie Robertson revealed that she is in a relationship with Disney Channel actor Austin North. The couple have kept social media on fire ever since with photos of their budding relationship.

The latest photos of Sadie and Austin show them more in love than ever, and looking better than ever, as they take a dip in the ocean. A shirtless and chiseled Austin posed alongside Sadie who donned a red Calvin swimsuit. “hey lova lova I’m absolutely crazy bout ya :)))” Sadie captioned the photo on her Instagram account.

Austin shared a similar picture with a caption that simply read, “Baewatch.”

20-year-old Robertson first met her 21-year old beau online two years ago when the actor sent her a DM on Twitter. He eventually asked for her phone number and the two spent the summer calling and texting, but didn’t meet in person until somewhat recently.

“I was in LA for my book press, and my friend said she wanted to set me up with someone at Churchome when we went on a Wednesday night, and to my surprise it was Austin!” Sadie told ET. “We both laughed and couldn’t believe the randomness of finally meeting [through] a friend who had no idea we even knew each other.”

Sadie added that they instantly had a connection.

“We hung out the next two days I was in town. Then I came back and he took me on our first official date. It’s new, but we both are so happy and just having fun,” Sadie said.

Both Robertson and North lead busy lives and are working hard to make their long-distance relationship work.

“We are both super supportive of each other’s career and that’s been so awesome,” she explained to ET. “We look forward to getting to support each other in different things. He already plans to come see me speak at an upcoming event, and I can’t wait to watch his new show coming out. The good thing is I have a lot of work in LA right now, so I will be out there often, and his sister is working in Nashville with her music. So we are just going to make it work.”