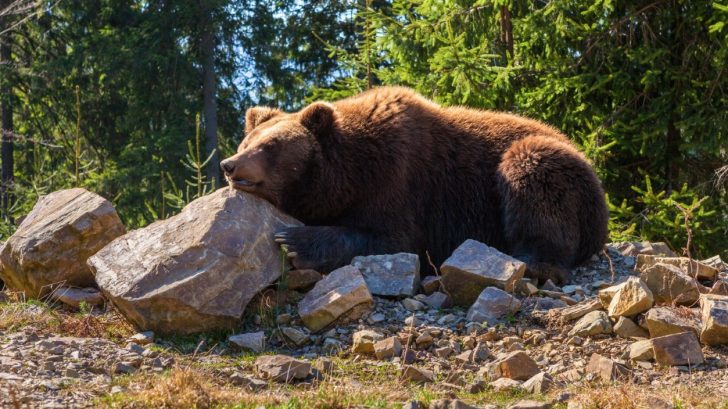 23-year-old professional Russian boxer Ilya Medvedev is said to be in critical condition after fighting off and killing a brown bear with a knife after it mauled and killed his friend.

Medvedev was fishing with his 48-year-old friend Vyacheslav “Slava” Dudnik and 41-year-old Denis Chebotar. They had pulled their boat over to the embankment of a stretch of water near the Irtysh River in Siberia to get out and do some fishing when the attack to place.

“I heard screams. They shouted, ‘A bear!’” eyewitness Chebotar said, according to the New York Post.

Chebotar said he was fastening their boat to the riverbank when the other two men yelled that a bear was in the area. He quickly dropped what he was doing and ran over to the men who had stepped off into the forest near the water’s edge.

The fisherman heard gunshots and said when he finally made it to the other guys, Dudnik was dead and Medvedev was stabbing the bear to death. Medvedev flopped to the ground in exhaustion after the attack and was in what Chebotar called “grave condition.”

He dragged the “barely alive” boxer into the boat and, as fast as he could, transported him to the nearest hospital. Doctors said he suffered serious wounds during the struggle and had lacerations to the head and body. Medvedev is currently in intensive care.

Chebotar said the bear was shot four times until it knocked the firearm out of the boxer’s hand and began mauling him. Medvedev somehow managed to pull out his knife and stab the bear until it stopped attacking.

Russian authorities said that an investigation has been launched into the incident.

Medvedev won a gold medal in the 64kg weight category at the Armed Forces Boxing Championships in 2019. The International Boxing Association President Umar Kremlev said that they will cover the hospital bills for the 23-year-old.

“We are already in touch with Ilya‘s family and will provide all-round support to him and his parents, a real fighter in a difficult situation, and we very much hope for his speedy recovery,” Kremlev said.