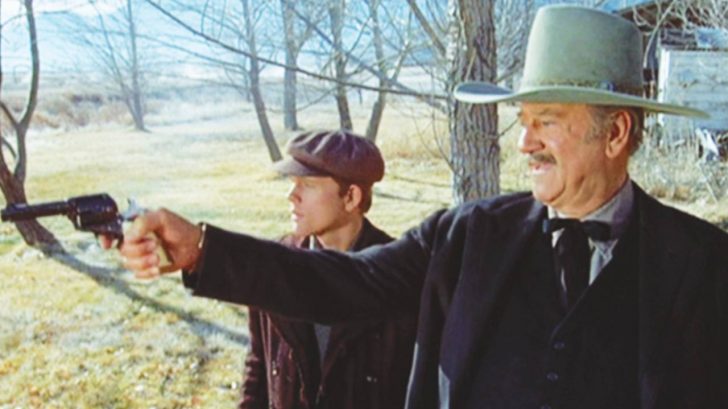 In 1976, Ron Howard was already a star thanks to his time on The Andy Griffith Show and was at the height of his popularity being two years into his ten-year run as Richie Cunningham on Happy Days.

He starred alongside a legend who would be acting in his very last film, John Wayne. The Shootist ended up being Wayne’s final film because just three years after its release, the star passed away from stomach cancer.

Speaking about working with Wayne on the film, Howard told Huffington Post, “I always admired him as a movie star, but I thought of him as a total naturalist. Even those pauses were probably him forgetting his line and then remembering it again, because, man, he’s The Duke. But he’s working on this scene and he’s like, ‘Let me try this again.’ And he put the little hitch in and he’d find the Wayne rhythm, and you’d realize that it changed the performance each and every time.”

In an interview with Men’s Journal, Howard said, “John Wayne used a phrase, which he later attributed to [film director] John Ford, for scenes that were going to be difficult: ‘This is a job of work,’ he’d say. If there was a common thread with these folks – Wayne, Jimmy Stewart, Glenn Ford – it was the work ethic. It was still driving them. To cheat the project was an insult. To cheat the audience was damnable.”

While he has incredible memories of the movie now, he wasn’t really sure what to expect before production started, especially because of what he had heard about the legend.

“That was kind of strange,” Howard told TV Guide. “I went into The Shootist expecting not to have a great time. Wayne was notorious for not getting along with young actors.”

The first time Howard ever met Wayne, someone gave The Duke the TB Guide where the young red-headed star was on the cover.

“Ah, here’s big shot,” Wayne said when Howard walked in the door the very first time they ever met.

Turns out, Howard’s history of television acting struck a chord with Wayne and they bonded over it. He also respected the young actor because he was the only actor to ever ask him to run lines.

In the end, Howard revealed that Wayne “couldn’t have been nicer.”

We love to hear that!