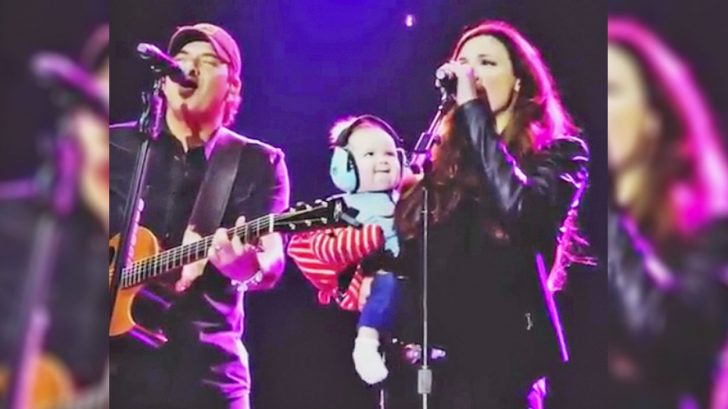 When Rodney Atkins isn’t getting “Caught Up in The Country” with his beautiful family, he’s bringing them on tour! Besides, what would a show be without an appearance from his favorite guests?

The Tennessee-native has been gracing the country music world with hits since the early 2000s. From “It’s America” to “Farmer’s Daughter,” fans just can’t get enough of Rodney Atkins’ twangy tunes. While he continues to produce records today, Rodney has even included his wife, Rose on some of the tracks.

On December 15, 2017, the Atkins family got the gift of a lifetime: a baby boy. Ryder Falcon quickly became the star of the show. As Rodney geared up for shows across America, his son was right there alongside him, including Rose too! Once baby Ryder was old enough, Rodney and Rose gave him his big stage debut…and he crushed it!

My favorite little moments out on the road… ? : @kirkneidermyer

It became a family tradition as the trio took the stage together for at least a song or two and fans love every minute of it. Looks like Ryder was more than ready to follow in his daddy’s footsteps!

Ryder is growing up fast but Rodney still loves to carry on the tradition. The singer posted an adorable video of him on stage accompanied by Rose and Ryder on her side. As the couple sang, Ryder rocked some large headphones to protect his little ears from the adoring crowd. Baby Atkins watches his mom and the crowd in amazement before completely stealing the show.

Family traditions! Love having Ryder and Rose up on that stage with me.

Right as the song ends, Ryder grabs the microphone ready for his solo. As Rose lowers it toward him, he sings his little heart out – in baby noise of course. The crowd roared with applause and support following his sweet serenade. Just like Rodney said, it looks like “It runs in the family.”

It runs in the family. #TBT