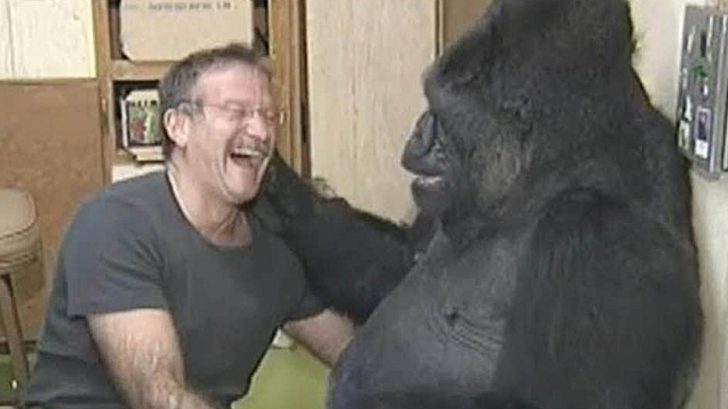 In 2001 one of the best comedians of all time, Robin Williams, made a sad gorilla named Koko smile for the first time in six months after her best friend and playmate, another gorilla named Michael, died.

Robin Williams and Koko the Gorilla had an irreplaceable bond. You'll understand just how deep their connection was when…

Koko had been depressed, withdrawn, and sad after her friend passed away and the Gorilla Foundation wanted to do something to try to cheer her up so they reached out to Robin Williams, who was at the height of his career at the time, to see if he could possibly come try to make her smile.

Robin accepted the invitation after hearing about the grief-stricken elderly female gorilla and made his way down to see her. The moment he got into the room with her she was interested in him.

Koko the gorilla mourns Robin Williams' death in a touching tribute. http://nydn.us/Vm8pz9The two had a profound effect on each other when they met back in 2001.

Koko speaks fluent sign language and she tells him to follow and tickle her, which he does. They walk into another room and sit down together. The two just kept going back and forth tickling each other and smiling and laughing about it.

She takes his glasses off and digs through his pockets and wallet. The two just play together and everyone is amazed to see her smiling again. Take a look at the video below and watch the precious moment for yourself.