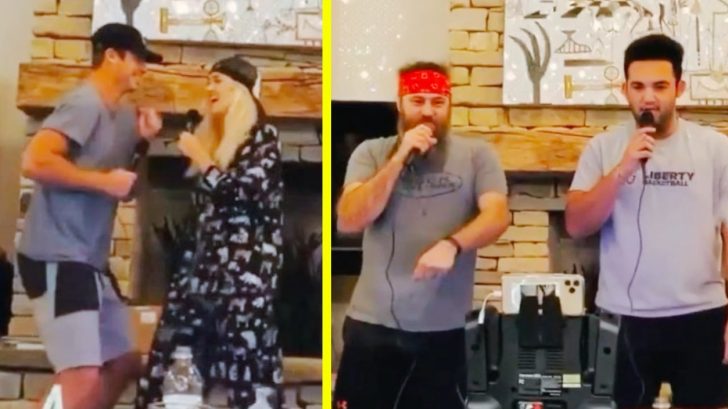 Believe it or not, many members of the Robertson family can sing quite well. The Duck Dynasty crew showcased their vocal talents on a 2013 holiday record titled Duck the Halls: A Robertson Family Christmas.

One of the standout tracks on the album was “Away in a Manger,” which a then 16-year-old Sadie recorded with Alison Krauss.

It’s hard to believe that Sadie is now 22, and a newly married woman at that! She tied the knot with Christian Huff on November 25, 2019.

The couple jetted off for a week-long honeymoon after the wedding, and returned just in time to celebrate the holidays with their families.

Sadie’s mom, Korie, shared a photo showing how much their brood has grown since Christmas of 2017. There are now many new Robertson family members, including Christian, and Korie and Willie’s grandbabies John Shepherd and Zane.

Christmas 2019 ➡️ 2017 We’ve added a few to the couch in the last 2 years! I was thinking today how each person here teaches me different things, brings out different parts of me, challenges me in different ways, loves and encourages me so uniquely. I wouldn’t be who I am without every single one of them, and I am forever thankful for these gifts! I pray that your Christmas was full of love, most importantly I pray that you know the unconditional, unending love of our Heavenly Father who loved us so fully and completely that he sent His son into the world to be with us! Immanuel, God with us ❤️

During their Christmas gathering in 2019, the Robertson crew seized the opportunity to showcase their singing voices…and dance moves!

The entire bunch participated in some lively rounds of karaoke. Sadie filmed some of the performances and shared them in a slideshow on her Instagram.

She started with a video of her and Christian singing “Uptown Funk” by Mark Ronson and Bruno Mars. The two got into their performance and were dancing as if no one was watching!

But one of the most hilarious parts was when Christian sang “hot ham” instead of the song’s real lyrics, “hot d—.”

Another funny karaoke performance occurred between Willie and Will Jr. The pair sang Lil Nas X’s “Old Town Road,” and couldn’t stop laughing as they did so.

You can flip through Sadie’s slideshow of videos below to see all of the Robertson family members’ karaoke performances. There is also a passionate rendition of “Don’t Stop Believing” to enjoy in the mix of clips!