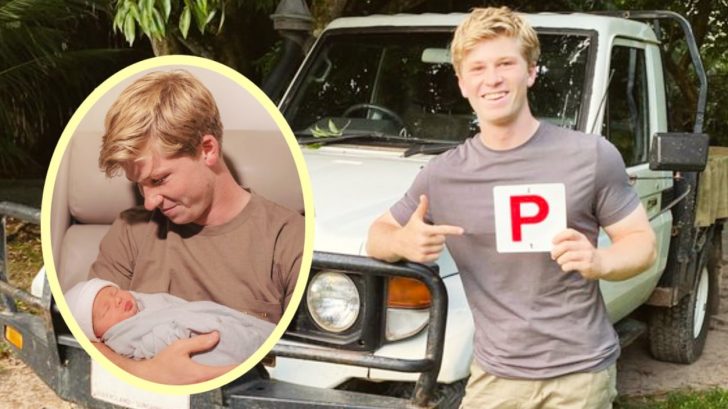 The Irwins have celebrated lots of milestones lately!

“There are no words to describe the infinite amount of love in our hearts for our sweet baby girl,” Bindi said. “She chose the perfect day to be born and we feel tremendously blessed.”

Bindi’s brother, 17-year-old Robert, was thrilled to meet his newborn niece. He shared a photo of him cradling Grace while looking at her lovingly.

“Let the uncle adventures begin!” he wrote. “Love you so much, Grace…This little one picked the two best parents in the entire world.”

Let the uncle adventures begin! Love you so much, Grace ❤️
This little one picked the two best parents in the entire world. The most incredible, caring & strong Mum… and the funnest, coolest & kindest Dad. Love you three so much – I can’t wait for this exciting journey ahead! pic.twitter.com/p2NgInx8XP

Right before Robert went to meet Grace, he celebrated a milestone of his own. He passed his driving test!

Robert shared a photo on social media that shows him posing against a vehicle while holding a white sign with a red “P” on it. In Australia, people must display this sign during their first few years of driving.

The vehicle Robert was photographed with is a special one. It belonged to his late father, Steve, and was his beloved “ute.” A “ute” is a utility vehicle with a cargo area in the back. Bindi previously passed her driving test in 2015 while driving the same car.

Robert celebrated his new status as a licensed driver by taking his first solo drive on an important trip. He drove to the hospital to meet his newborn niece.

“My first solo drive was a super special one – took my dad’s old Ute to see Grace in the hospital right after she was born,” Robert gushed on social media. You can see his celebratory post below.

Robert’s family celebrated his accomplishment along with him. Bindi commented on his post on Instagram, and wrote, “So proud of you!!!” His mom, Terri, expressed her happiness on Twitter, writing, “Not only did you pass, you did it with zero errors. 100% awesome!”

Passed my driving test! ?
My first solo drive was a super special one – took my dad’s old Ute to see Grace in the hospital right after she was born ? pic.twitter.com/O8Xq74FH2B