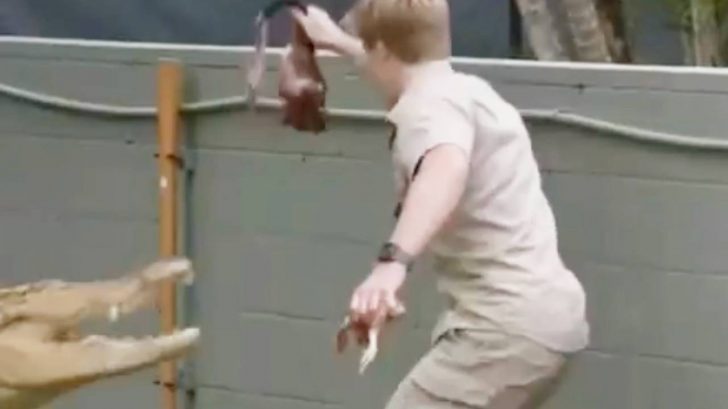 Robert Irwin is the spitting image of his late father, Steve Irwin. He wears the same khakis his dad once wore, he shares the same passion for wildlife, and he has followed in his dad’s footsteps at the Australia Zoo.

We have been able to follow the Irwin family’s journey thanks to different television specials and social media, but we’ve gotten yet another inside look at their work at the Australia Zoo thanks to the Animal Planet show, Crikey! It’s the Irwins, which started airing on October 28, 2018.

The show has shown us so much more of the Irwin family, like when Bindi gave birth to her daughter, Grace Warrior Irwin Powell.

In the Season 4 finale, Robert was leading the transfer of a crocodile named Casper to the Crocoseum, where he will be the new star of the shows. Robert explained to the cameras that they have to make sure Casper is “settling in nice to his enclosure” before transferring him to the Crocoseum. He explained that someone would have to go in the enclosure and entice him out of the water to check on him.

That lucky someone was him.

Robert explained that “if he comes out of the water with big strikes, that means he’s gonna be ready for the Crocoseum show.”

Casper shared his exclosure with his girlfriend Wendy, so a member of their team was with the female croc to distract her from what Robert was doing with Casper.

“Casper has such a wild behavior,” Robert said. “And since Dad first got Casper, he’s had that instinct….Since he’s been moved, I’ve got no idea how he’s gonna react and honestly, that’s quite terrifying.”

Robert lured Casper out of the water with some food and Casper took the bait, but after a few snaps, Robert told his team, “Bail, bail, bail!” and began running away. Scary!

On Instagram, Robert called it, “One of the most intense croc feeds I’ve done!… safety for us is also crucial and you definitely have to know when to call it. And with such a powerful and quick croc like Casper we had no choice but to bail!”

Everyone’s okay, but the footage was intense! Watch it below.