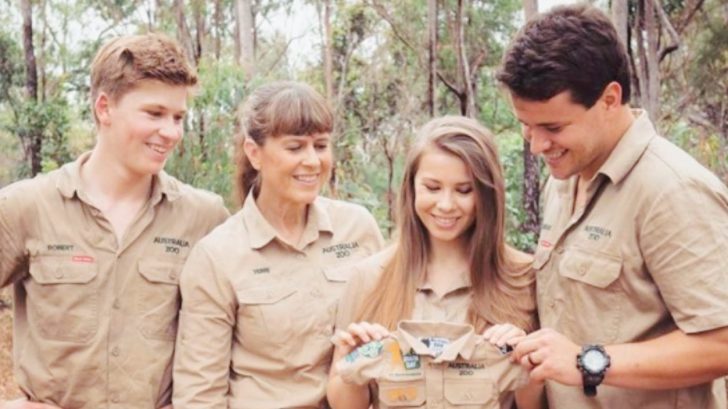 On August 11, Bindi Irwin and Chandler Powell announced that Bindi is pregnant with their first child. The happy news comes just five months after the couple married during an intimate ceremony at Australia Zoo.

“Chandler and I are proud to announce that we’re expecting!” Bindi wrote in a social media post announcing her pregnancy. “It’s an honour to share this special moment in our lives with you.”

Bindi shared a photo of her and Chandler holding up a tiny khaki shirt with the Australia Zoo logo that will one day be worn by their little animal lover. Their baby girl is due to arrive in 2021.

Baby Wildlife Warrior due 2021. Chandler and I are proud to announce that we’re expecting! It’s an honour to share this special moment in our lives with you. Though I’m still in my first trimester, we really want you to be part of our journey from the beginning of this new life chapter. We couldn’t wait to share the news as this beautiful little being has become the most important part of our lives. Your support means the world to us. Please let me know your best advice and send good vibes & prayers to our little sweetheart. Love & light. ❤️

Bindi’s family is thrilled for her and Chandler. Her mother, Terri, rejoiced on Twitter about the upcoming arrival of her first grandchild.

She also spoke about Bindi’s late father, Steve, saying “he would be so proud” of Bindi, Chandler, and their little one.

This is the best day ever! I am over the moon to announce that @BindiIrwin and @chandlerpowell9 are going to have a baby! Words cannot express the love that is filling my heart. While I wish that Steve was here to share this beautiful moment, I know that he would be so proud. pic.twitter.com/K4pTX6kIR6

As for Bindi’s 16-year-old brother, Robert, he is also over-the-moon about the newest addition to the Irwin family.

Robert made his own social media post about Bindi’s pregnancy, calling it “the most exciting news ever.” He expressed how happy he is for Bindi and Chandler as they begin their journey into parenthood.

The young conservationist and photographer is also excited about becoming a first-time uncle:

“I can’t believe I’m going to be an uncle!!!” he wrote in his post. “It’s such a happy time for our family – I look forward to this brilliant new chapter and all the fun adventures ahead with a new little Wildlife Warrior!“

The most exciting news ever! I am so happy for Bindi and Chandler to be welcoming a new member of the family. I can’t believe I’m going to be an uncle!!! It’s such a happy time for our family – I look forward to this brilliant new chapter and all the fun adventures ahead with a new little Wildlife Warrior!

As excited as we are to meet Bindi and Chandler’s baby, we can only imagine how thrilled Terri and Robert must be. Congratulations to all of them!

Learn more about Bindi’s pregnancy news by tuning in to the video below.