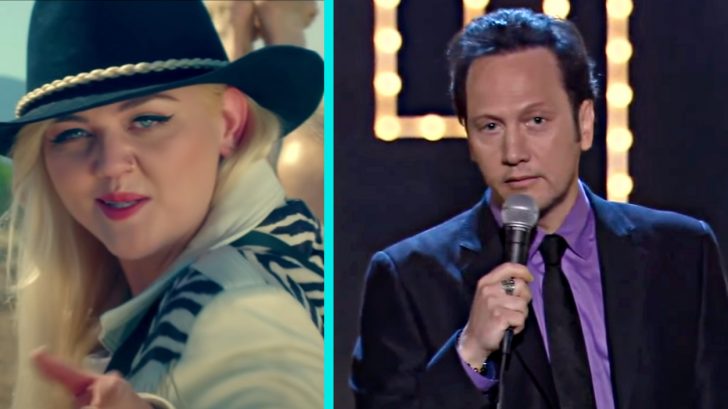 The famous movie star and comedian has been either on a stage or screen for more than 30 years and millions worldwide know him by name and by his side-splitting roles.

But, what many millions don’t know is that he’s the proud father of a world-famous rock star!

With roles in top-rated films like The Hot Chick, Deuce Bigalow: Male Gigolo, and the Grown-Ups series, it’s clear that Rob Schneider has worked hard to craft a career in comedy and film over the last few of decades.

Schneider has been married a total of three times and has welcomed three amazing children into the world. His first child, Tanner Schneider, was born in 1989 with his then-wife and model London King.

Now, just 30 years old, the eldest Schneider child is a fabulously-talented rock star…who even has crossed over into country music a time or two. With two Grammy nominations and the proud recipient of a CMA Award, it’s clear that this Schneider has made a name in music.

Tanner Schneider might be her birth name, but you likely know her best as her professional stage name: Elle King.

Yes, you read that right.

Elle King, the bluesy country rock goddess, is the daughter of none other than iconic comedian Rob Schneider.

#Repost @elleking with @get_repost・・・Welp, pilgrimage was still fun even though lightening shut everything down….

Over the years, Elle King and her dad have shared sweet photos and memories on social media. Clearly, they have a strong bond and a great relationship.

Elle actually made her on-screen film debut next to her dad in his movie Deuce Bigalow: Male Gigolo as the cookie girl who catches his character during his battle with the entertainment center at the house he’s watching.

Rob Schneider with his daughter, singer Elle King who rose to fame in 2015 with her breakout single “Ex’s & Oh’s.”

Elle has crafted a series of hits across rock, country, and pop genres – most notably with her hit “Ex’s & Oh’s.” She also had a #3 chart hit duet with Dierks Bentley for their 2016 song “Different For Girls.” The track earned them a Grammy nod and was certified platinum in both the US and Canada. Most recently, she joined Miranda Lambert for “Drunk (And I Don’t Wanna Go Home).”

Check out Elle and Miranda’s music video below!