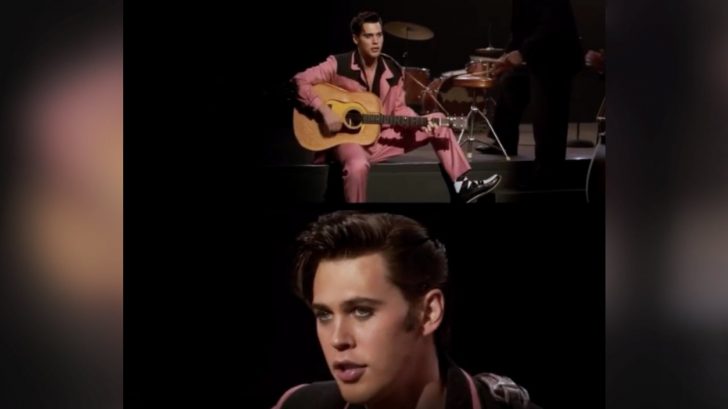 Critics seem to agree. The film received rave reviews following its showing at the Cannes Film Festival. It received a 12-minute standing ovation after it ended.

After seeing the trailers and hearing all of the critics’ reviews, fans have wondered if Austin does any of his own singing in the movie. Baz took to social media to answer this question:

“The response to Austin’s version of Trouble has been tremendous but so many of you still ask, ‘is it Austin singing?’ I feel I haven’t been clear enough in conveying that,” Baz said.

The director shared that Austin does all of his own signing as “young Elvis” in the movie. To showcase Austin’s talent, Baz shared a video of a “very early camera test” that shows Austin singing as Elvis in 2019.

Austin can be seen singing Elvis’ debut single “That’s All Right” in the video. Baz offered some additional context, saying that Austin delivered this performance BEFORE he underwent two years of vocal studies to play Elvis:

“Even before his two years of vocal studies I feel that Austin is channeling the vocal qualities of Elvis,” Baz said. “Thank you @austinbutler for letting me share this early test to give the fans an insight into your journey.”

Elvis’ eldest granddaughter, Riley Keough, shared the clip on her own Instagram page. She made it obvious she is in awe of Austin’s talent:

“One of the most remarkable parts to me about @elvismovie that people may not know (because he’s done such an fantastic job) is that @austinbutler is singing all of the early Elvis vocals himself… what he was able to do is just so beautiful,” Riley said.

You can watch the video of Austin singing as Elvis below. This makes us even more anxious to see the movie!