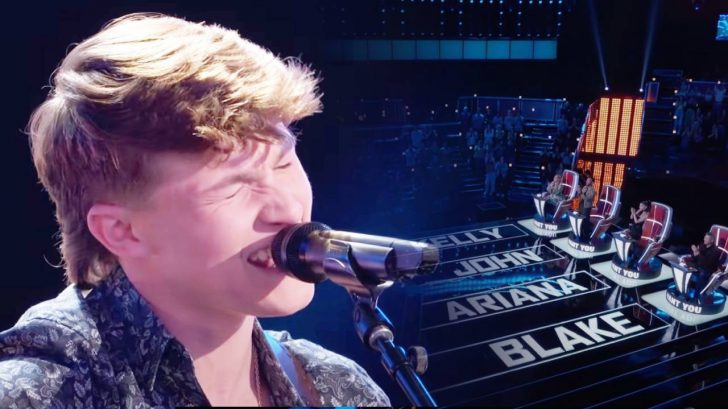 On Monday’s episode (Sep 27) of The Voice, we were introduced to 17-year-old singer Carson Peters when he performed Don Williams’ “Tulsa Time” during the Blind Auditions.

He put a bit of a rock twist to the country classic, and gave it some personal flair with a few vocal runs. John Legend was the first to turn his char, followed quickly by Shelton who started singing along and playing air guitar. Ariana Grande was next When Shelton turned, Peters flashed a huge smile, perhaps giving away who his first choice as coach was.

Legend asked him, “Do you perform a lot?” to which Peters replied, “I started out playing the fiddle.”

“My chances are getting better and better!” Legend joked.

Clarkson asked him who his influences are. Peters said, “One of my really biggest influences, and I’ve been lucky enough to play with him, is Mr. Ricky Skaggs.”

That’s when we realized we’ve known about Carson for many years because he has actually performed with Skaggs on more than one occasion! Below is their collaboration at the Grand Ole Opry when Carson was just 10 years old.

They reunited for a performance on Larry’s Country Diner. Check it out below.

Skaggs found out his two-time duet partner would be competing on The Voice and took to Facebook to encourage his fans to watch.

Just a few hours later, Skaggs doubled down on his support of Carson with another post, writing, “Go Carson! Can’t wait to watch ‘The Voice’ tonight!”

Check out the video below to see who Carson chose as his coach!