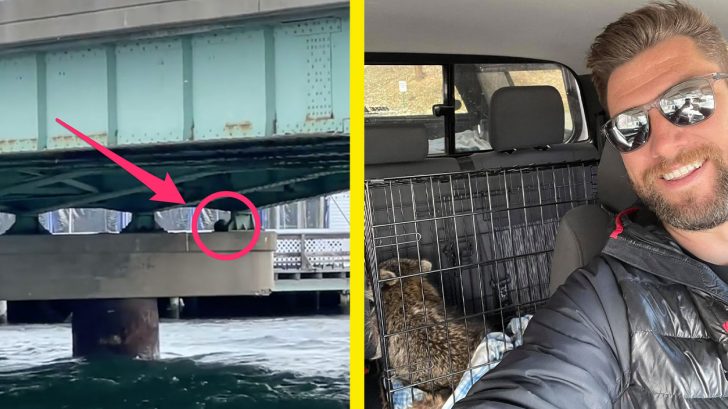 Retired Marine and fitness trainer, Alec Liberman had an interesting day when he performed a daring rescue for an animal in need. According to the local news, Seacoastonline, it all started on Thursday morning, April 22, 2021, when he looked out the window of his houseboat on the Piscataqua River and noticed something moving on a nearby bridge.

The creature happened to be a raccoon and Liberman noticed that it kept walking back and forth in the same spot on the bridge for a half hour.

He called a local animal control agency to report what he had seen and left for a morning workout. Returning a few hours later, he saw the raccoon was still there and the cold weather conditions had “gotten a lot worse.”

With his military background and his career in fitness training, he was undoubtedly equipped with the strength and skills to perform a dangerous rescue.

He went to The Home Depot where he purchased a rope long enough to reach the raccoon. With the assistance of his neighbor and armed with a duffel bag, Liberman descended the rope with the rapidly moving river about 30 feet below him.

The raccoon was exhausted and easily scooped into the bag so Liberman could climb both of them back up to safety.

Liberman said he called a local wildlife center to help decide what to do next. He said he was told if the raccoon appeared to be uninjured and healthy, he could release it into the wild.

Since the animal appeared to be fine, Liberman brought it to a woodsy area near the bridge and released it.

Watch the raccoon’s happy release below.