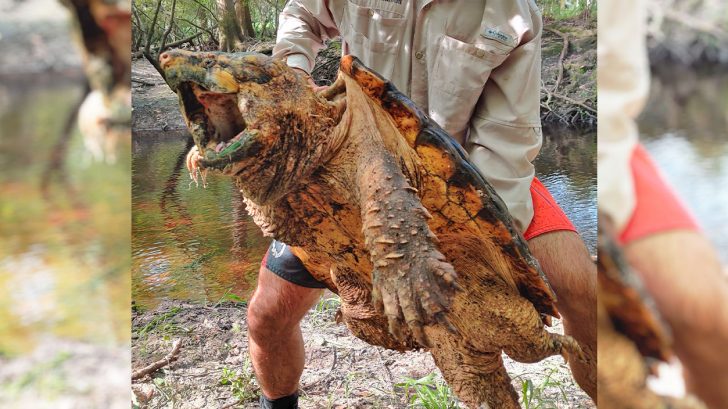 The Florida Fish and Wildlife Conservation Commission (FWC) researchers were checking traps when they came upon a 100-pound male alligator snapping turtle that belongs to a newly-discovered species.

The FWC was doing research in the New River – a 31-mile-long tributary of the Santa Fe River, north of Gainesville, Georgia. They set six hoop traps, which are 4-feet in diameter in different spots throughout the river. The researchers were pleasantly surprised when they caught a 100-pound male alligator snapping turtle along with a 46-pound female, and another 64-pound male.The New River is a blackwater stream with low biological productivity so capturing turtles of this size is extremely rare.

This week our biologists were out checking traps set for the Suwannee alligator snapping turtle, Macrochelys…

All three turtles are a subspecies of alligator snapping turtles known as macrochelys suwanniensis. This is a new species that FWC helped describe in 2014 and have continued to document the distribution and relative abundance of this state-threatened species.

The discovery of new species isn’t as uncommon as one might initially think. As the world changes and animals adapt there are new species and variant species being discovered each year. According to the California Academy of Sciences in the year 2019, a total of 71 new confirmed species were discovered. Often times, it can take years before a new species can be confirmed due to the fact that they’re generally harder to come by in the wild.