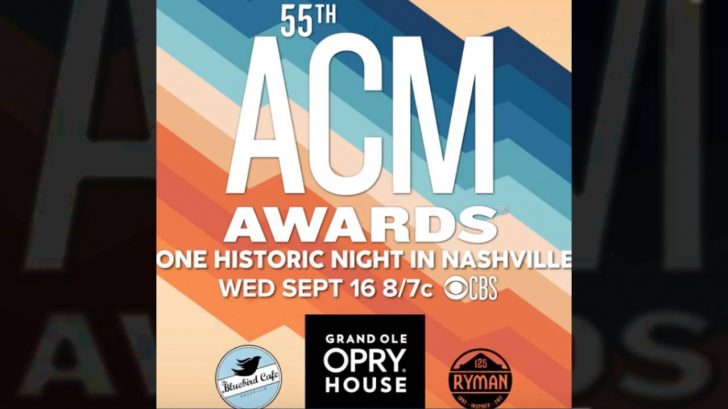 The 55th Annual ACM Awards were supposed to take place on Sunday, April 5 at MGM Grand Garden Arena. Keith Urban was set to host for the very first time, but due to the coronavirus pandemic, plans were changed.

Instead of airing the awards show on the already scheduled date, the Academy of Country Music put together a TV special called ACM Presents: Our Country and it featured performances from country singers in the comfort of their own homes, like this one from Shania Twain. She sang “Honey I’m Home” and “Man! I Feel Like A Woman!” with a little help from her beautiful horse.

Because of coronavirus, the ACM Awards were moved to Wednesday September 16th with Urban still serving as the host. During the initial announcement about the date change, which was on March 15, the Academy had yet to say where the show would take place.

For more information on the 55th ACM Awards, refunds and more, visit our FAQ page.

Over a month after the initial date change announcement, the ACM is finally ready to reveal where the September awards show will take place – Nashville!

Believe it or not, the ACM Awards has never been held in Music City in its 55-year history. The show has been held in Las Vegas since 2003, with the exception of the 2015 show, which took place at AT&T Stadium in Arlington, Texas. Prior to 2003, the show was consistently held in Los Angeles.

The rescheduled 55th Annual ACM Awards will actually be taking place at three different venues in Nashville, the Grand Ole Opry House, the Ryman Auditorium, and the Bluebird Cafe.

“In an unprecedented move, the 55th ACM AWARDS® will be the first awards show to broadcast from three iconic Country Music venues,” a press release stated.

Nashville Mayor Cooper made the announcement during a press conference Monday morning (April 27).

“I’m excited to join country music fans worldwide to celebrate with the Academy of Country Music and artists that uplift and inspire us all in these extraordinary times. And I look forward to the day when we can safely welcome visitors back to enjoy all that Music City has to offer, including over 160 live entertainment venues with the best country music shows in the world,” he said, according to the press release.

Following the press conference, the ACM released an announcement on social media. See it below.

Excited to announce that the 55th #ACMawards will broadcast for the first time from Nashville’s iconic @opry House, @theryman & @bluebirdcafetn! Mark your calendars and join us on Wed, Sept. 16 at 8/7c on @cbstv.