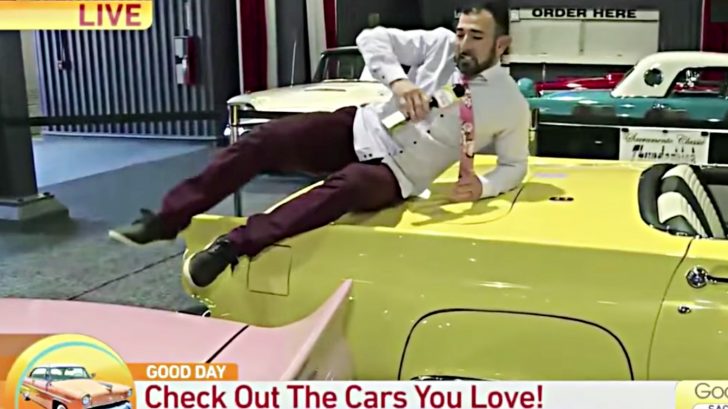 One news reporter from northern California lost his job this week after a series of on-air blunders that would just about make anyone cringe…and you can witness it for yourself.

On Sunday, October 20th, 2019, The Sacramento International Auto Show was doing a segment with local TV station KMAX-TV as part of their “Good Day Sacramento” morning show when reporter Angel Cardenas got very carried away.

“So I’m just going to live on the wild side,” he said before jumping onto a 1950s yellow T-bird convertible.

He joked about there being nobody around so he was like “a kid in a candy store.” As if him jumping onto the first car wasn’t enough…it gets worse.

Most folks know, even without being told, that you probably should not be touching these very old, expensive, and hard-to-repair cars. It’s like being in a museum – you just don’t touch things.

However, for this guy, he wasn’t quite done. He quickly moves onto another car, yanks the door open and dings the car next to him. By now, everyone at home could feel the waves of secondhand embarrassment washing over them as they witnessed his career go up in flames on live television.

“Oh no, I hit that other car,” he said looking around to see if anybody was nearby. “I don’t think anyone saw it.”

Just when you thought you’d seen enough…it continues to go on.

At the end of the segment, he had meandered over to the brand new Ford display models that had been brought in. Dodging around the barrier, he ignored a sign that clearly read “KEEP OFF” and jumped really hard onto the hood of a new SUV with quite a loud crunch underneath his hip.

“That didn’t sound good!” he said before someone off-camera yelled at him to get off the car. “Oh boy, I’m going to get in trouble.”

It wasn’t long and he did, truly, get in trouble.

A statement posted to the Sacramento International Auto Show’s official Facebook page confirms that he was immediately terminated following the incident.

Additionally, he has been removed from the news station’s social media, website, and other public-facing pages.

Watch the entire clip below – and make sure you watch through the end to catch the whole series of events.