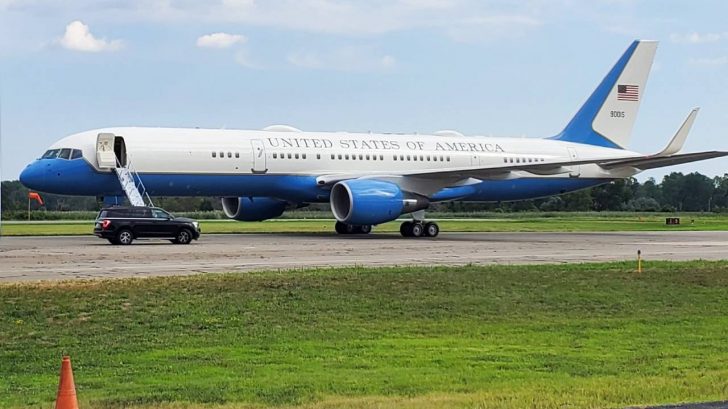 According to Daily Wire, the particular plane the president was on was a C-32A, which is based on a Boeing 757-200. Along with the president, the people on board included First Lady Melania Trump, their son Barron, and several reporters.

Pres & Mrs Trump and son Barron transfer from Marine One to Air Force One at the airport in Morristown, NJ, on the way back to DC. pic.twitter.com/vCtnzmYQwG

According to those reporters, Air Force One narrowly missed hitting an object in the sky, which many of them believed was a drone.

AFP White House correspondent Sebastian Smith tweeted about it once they safely landed at Andrews Air Force Base. He wrote, “@realDonaldTrump just landed at Andrews on AF1. Shortly before, while descending, we flew right over a small object, remarkably close to the president’s plane. Resembled a drone though I’m no expert.”

@realDonaldTrump just landed at Andrews on AF1. Shortly before, while descending,we flew right over a small object, remarkably close to the president’s plane. Resembled a drone though I’m no expert. pic.twitter.com/roDFgpp4XH

Jennifer Jacobs, a senior White House reporter for Bloomberg News, also tweeted about what Smith saw. According to her tweet, many others saw it as well.

Multiple people on AF1 saw what appeared to be a drone just below the plane as we were descending toward Joint Base Andrews.

We came very close to hitting it, per @SebastianAFP, who had a window seat. pic.twitter.com/WVbxT9ckG7

According to DPReview.com, an investigation into what the object was and why it was so close to the plane has been opened by White House military officials.

The president has not commented on the incident. Watch a video about Air Force One below.