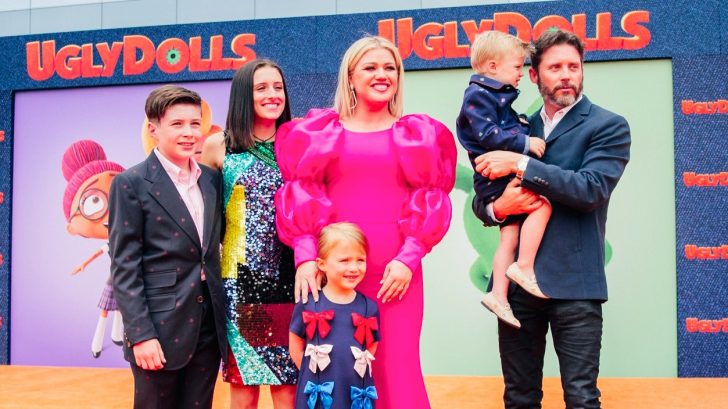 It’s no surprise that Kelly Clarkson is all about her kids.

She actually became a mom before she even gave birth. When she married her husband Brandon Blackstock in 2013, she became a stepmom to his children, Savannah and Seth, from his first marriage. She and Brandon also are parents to River Rose and Remington (Remy) Alexander.

Even though she has stepchildren, she forgoes the word “step” and considers them her children. Kelly enjoys bringing all her kids to work with her, whether it be to the recording studio, the set at The Voice, walking the red carpet, or even on stage with her at a concert.

Last year, she brought Savannah and River to the American Music Awards with her, and they looked like they had so much fun together! Brandon and Remington met the ladies backstage, where they snapped this cute photo. Kelly joked in the caption the Seth was busy on another red carpet, explaining his absence from the picture.

On her 2015 tour, she brought out her son Seth to help her with her “Uptown Funk” and “Walk Away” mashup.

Most recently, River starred in Clarkson’s music video for “Broken & Beautiful,” which is from the movie Ugly Dolls.

In Ugly Dolls, Kelly voices the main character, Moxy, and is joined by many talented artists including Blake Shelton, Bebe Rexha, and Nick Jonas.

The movie premiered over the weekend and because it is a family-friendly movie, Kelly made the event a family affair! She was joined on the red…we mean, orange carpet by her husband Brandon, and their four children, (from left) Seth, Savannah, River, and Remington, for the very first time.

“So happy to have my family with me for the Ugly Dolls Movie premiere! Such a great movie with a wonderful message!” she captioned the series of photos.

Make sure to swipe through to see them all!

So happy to have my family with me for the Ugly Dolls Movie premiere! Such a great movie with a wonderful message! #UglyDollsMoviePremiere ✨ Mua: @gloglomakeup Hair: @robertramoshair Stylist: @cdicelove13 Photo: @weisseubanks Nails: @nailsbytsha ✨

We love seeing Kelly with her kids, and her kids love going to these events with her, especially River Rose. Watch Kelly talk about River’s red carpet diva behavior in an interview with Access below.