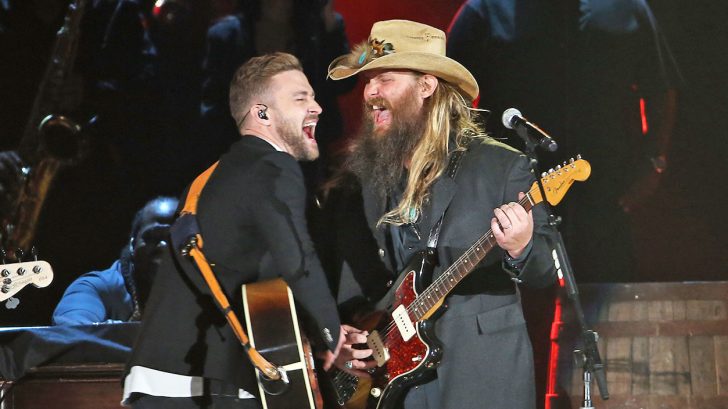 As he seemingly swept the awards show, and sent the Internet abuzz, he also gave the most talked about performance of the night with his good friend Justin Timberlake. They delivered a mash-up of his version of the George Jones classic “Tennessee Whiskey” and Timberlake’s Memphis soul-inspired song “Drink You Away.”

This Justin Timberlake and Chris Stapleton performance was the MVP of the #CMAs: https://t.co/7eKSzHBkfd pic.twitter.com/bkxkwpK3yY

Suddenly, everyone had to know who Chris Stapleton was, and his CMA Award-winning album’s sales went up 6000%, re-entering the Billboard 200 at number one after being absent from the chart for over a month. Stapleton originally released the album in May 2015, where it debuted on the country albums chart at number two. It has since been certified platinum and was the fourth best-selling album of 2016.

Backed by Stapleton’s own band, as well as Timberlake’s Tennessee Kids, their CMA Awards set packed a powerful punch with brass instruments and mind-blowing talent. As Brad Paisley said introducing them, it truly was a perfect mesh of “the Nashville sound and the soul of Memphis.”

Timberlake and Stapleton had the entire audience on their feet singing along, with Keith Urban enjoying it so much he had to record it on his own phone! Just about everyone in attendance took to Twitter to praise the performance. Check out a couple reactions below.

Please if there is a God let there be more music like this that people are craving! #ChrisStapleton #justintimberlake #CMAAwards2015

Timberlake and Stapleton’s duet is considered the best performance of the night and one of the most memorable in CMA Awards history. Watch the performance below to remember this incredible moment.