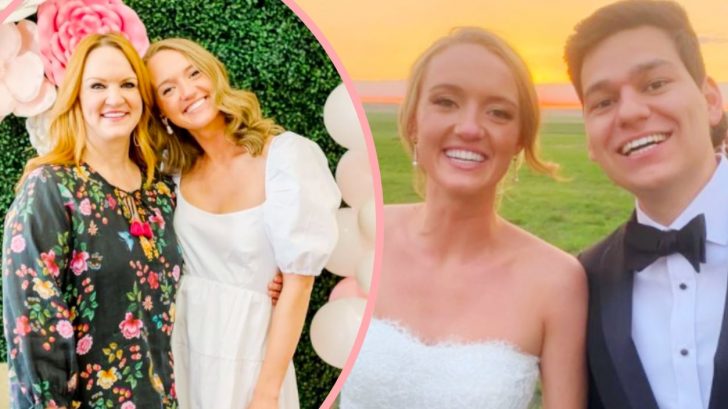 Congratulations are in order for Ree Drummond and her husband, Ladd, because their oldest child, Alex, just got married on Saturday (May 1)!

On the morning of the wedding, “The Pioneer Woman” shared a photo of herself and Ladd watching the wedding party rehearse the day prior. Ladd was wearing a neck brace, which he’s been wearing while healing from an injury he sustained earlier this year.

Ree captioned the photo, “Our honeymoon baby is getting married tonight,” before writing, “(TMI?)“

23-year-old Alex married 24-year-old Mauricio Scott on her family’s ranch in Oklahoma. Leading up to the wedding, Alex expressed her concerns that the weather would ruin her wedding plans, since she planned for everything to be outside.

“I’ve been praying like every single day. I know it’s probably like…a selfish prayer, but I’ve been praying for good weather, because it would kind of be a disaster if it was like raining or…tornado…” Alex said in a video on The Pioneer Woman Magazine‘s Instagram just days before the wedding.

Thankfully, the weather cooperated, and the ceremony went on without a hitch!

Alex shared a ton of the wedding guests’ videos and photos on her Instagram Story. The clips and snapshots show her and Mauricio enjoying their first dance as husband and wife, giving a toast, and walking out into the prairie for pictures.

See just a few of the photos Alex shared below. Some of the best pictures were taken by her younger sister, Paige!

Ree’s own restaurant, the Mercantile, was in charge of catering for the event. She previously teased the menu, saying the main course would be beef tenderloin, and sides would include mashed potatoes and macaroni and cheese with caramelized onions. Sounds delicious!

As of this writing, Ree has yet to comment on her daughter’s wedding. But we’re sure she is over the moon with happiness right now!

Congratulations to Alex and Mauricio! May they enjoy many joyous years together.