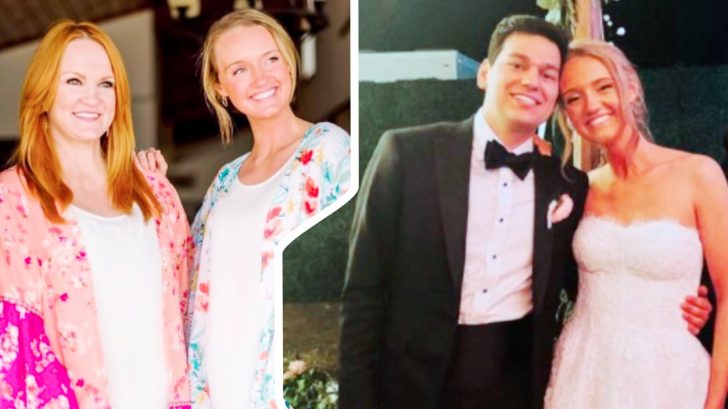 Ree Drummond is still floating on Cloud Nine following her daughter Alex’s wedding on Saturday (May 1)!

Before the ceremony, Ree shared a photo of her and her husband, Ladd, watching the wedding rehearsal. “Our honeymoon baby is getting married tonight. (TMI?),” she wrote.

Alex, age 23, is the oldest of Ree and Ladd’s kids. So it was surely an emotional thing for them to watch her marry the love of her life, Mauricio Scott (age 24).

“The Pioneer Woman” shared a photo of Alex and Mauricio kissing during the ceremony, and wrote, “Alex and Mauricio’s wedding was beyond…” including three heart-eyed emojis.

“I will be sharing many (many many!) photos soon…but I couldn’t wait to post one of my very favorites.”

Alex and Mauricio were married on the Drummond family ranch in Oklahoma. They planned for the entire event to be outdoors, so Alex and Ree kept a close eye on the weather leading up to the ceremony.

Thankfully, it didn’t rain or storm! Although there were “a few last-minute scrambles,” as an article on Ree’s Pioneer Woman website explains.

For example, Mauricio’s tux had to be shipped overnight in order to make it in time for the ceremony. Talk about a close call!

But in the end, everything worked out perfectly:

“It was such a meaningful, memorable night—beautiful flowers, great food, and so much fun…but what we all felt most of all was the love,” Ree said when reflecting on her daughter’s big day. “It was even more special than any of us could have hoped for.“

The article states that Ree wore a mother-of-the-bride dress by Jovani, and promised “she has a funny story” to share about the dress in a later post.

Grant Daniels, who was the wedding photographer, shared a series of Alex and Mauricio’s wedding photos in two slideshows on Instagram. You can see those photos below.

Also, check out even more photos (including ones of Ree) by reading the Pioneer Woman article about the wedding here.