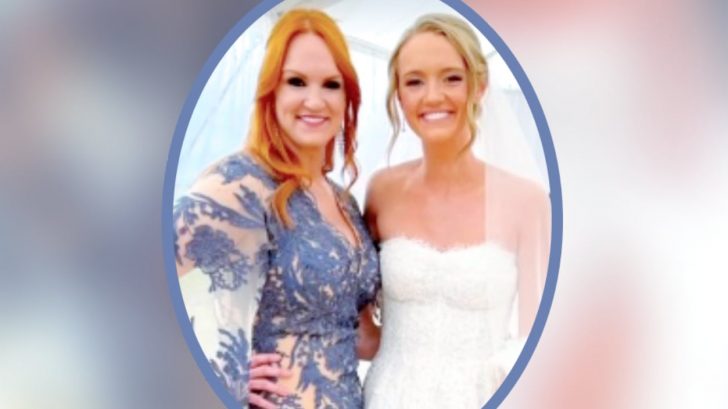 On May 1, “Pioneer Woman” Ree Drummond watched her oldest child, Alex, marry the love of her life, Mauricio Scott. Alex and Mauricio were married on the Drummond family ranch in Oklahoma in front of their family and friends.

Alex’s bridesmaids wore dresses in a shade of pale blue. Ree’s mother of the bride dress coordinated with the rest of the wedding party, as it featured a powder blue floral pattern on a sheer, beige fabric.

Ree looked stunning in her gown, which had flowy sleeves that were open on the underside, giving the dress a cape or shawl-like appearance. The dress was designed by Jovani.

When Ree first spoke about Alex’s wedding for an article on her Pioneer Woman website, she said she had a “funny” story to tell about her mother-of-the-bride dress.

Ree finally told that story in its own article on her website. When talking about the story Facebook, she said it was a “weird, twisted tale.”

As a huge fan of the show, Ree intentionally searched for a Jovani dress when it came time for her to pick out something to wear to Alex’s wedding.

“…I googled “Jovani” and decided at that moment that I was going to do everything I could to wear the brand at Alex’s wedding, because the Real Housewives are my imaginary best friends and I wanted them to come to the wedding with me,” Ree said.

She found the dress she would eventually end up wearing to the wedding, purchased it, and shoved it in her closet. But even though she obviously liked the dress, Ree considered other options up until the last minute.

“In recent months I’d ordered and rejected/returned about eight different dresses, winding up with one additional (non-Jovani) option,” she said. “Until the wedding day, I still didn’t know which one I’d wear…but ended up going with the Jovani!“

She said the Jovani dress ended up being the one for her, since the other option she had in mind was “fancy and glitzy, and it wouldn’t have felt quite right at the ranch.”

We think Ree looked lovely! The Jovani dress truly was the perfect fit for Alex and Mauricio’s wedding!