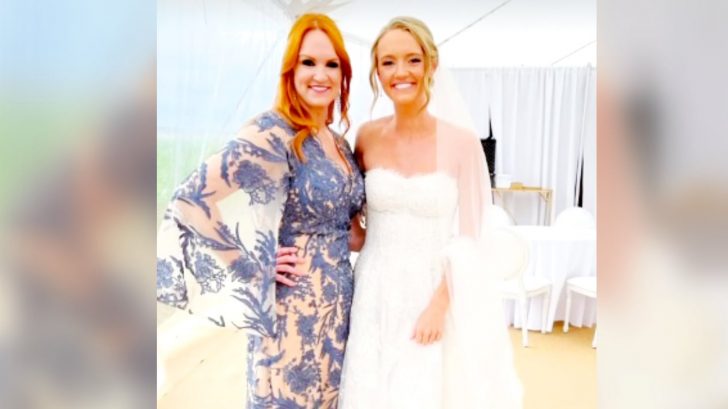 Alex married Mauricio Scott on Saturday (May 1) on the Drummond family’s ranch in Oklahoma. Since they planned for everything to be outside, the weather was a huge concern. But everything turned out just fine!

The elated Mother of the Bride shared a photo of Alex and Mauricio kissing while her four other kids (Paige, Bryce, Todd, and Jamar) could be seen in the background. The photo, which was taken by wedding photographer Grant Daniels, is one of Ree’s “favorites” from the special day.

Ree shared even more photos from the wedding in an article on her official Pioneer Woman website. The article, written by Megan Stein, includes every little detail that made Alex and Mauricio’s wedding day a “magical” one.

“It was such a meaningful, memorable night—beautiful flowers, great food, and so much fun…but what we all felt most of all was the love,” Ree said. “It was even more special than any of us could have hoped for.”

As mentioned previously, the wedding was held on the Drummond family ranch. The dress code was black-tie optional, and the photos show all the guests dressed to the nines!

Ree’s mother-of-the-bride dress was designed by Jovani, while Alex’s strapless lace wedding gown was designed by Monique Lhuillier. All of the Drummond men and Mauricio wore black suits and tuxes, and the bridesmaids wore pale blue dresses.

The couple chose not to do a “first look” before the ceremony.

“When I thought about the wedding day, that’s what imagined: my dad getting to walk me down the aisle…and seeing Mauricio for the first time,” Alex said.

After the ceremony, the bride and groom joined their guests for a cocktail hour. The cocktail hour was followed by the reception, which was held under a large tent decorated with tons of flowers.

Ree’s own restaurant, The Mercantile, provided the food for the reception.

“…Ree’s awesome staff at The Merc included a spring field greens salad with tiny vegetables for the starter, and a steak and shrimp duet with sides like caramelized onion and bacon mac and cheese, charred veggies, and mashed potatoes. All of this was, of course, taste-tested by Ree herself beforehand,” the article about Alex’s wedding states.

Alex and Mauricio also had a six-tier wedding cake made by Amy Cakes. It was decorated with real flowers, as well as edible lace to mimic Alex’s dress. Mauricio also had a groom’s cake that was shaped like a sports jersey and represented his favorite teams.

The newlyweds shared their first dance to Leon Bridges’ “Beyond.”

Alex’s father-daughter dance with her dad, Ladd, was to Brooks & Dunn and Reba McEntire‘s “Cowgirls Don’t Cry.” As for Mauricio, he danced with his mother to Kenny Rogers‘ “Through the Years.”

After dancing their hearts out at the reception, the fun continued at an after-party at P-Town Pizza. Guests enjoyed pizza, wings, and snacks while busting a move on the dance floor.

Alex and Mauricio are going on a honeymoon in the Maldives to enjoy some time on the beach. They’ll move in to their first house together in Dallas, Texas when they return.

Join us in congratulating Alex and Mauricio on their marriage! May they enjoy many years of love and happiness.