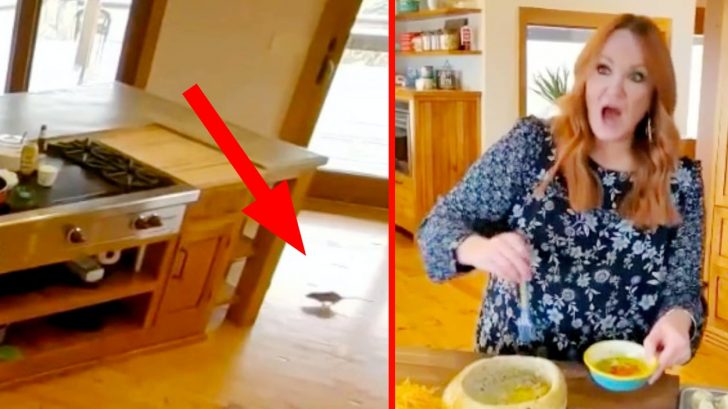 Ree Drummond once had an unwanted and unexpected guest on set while she was filming her cooking show, The Pioneer Woman. And that unwanted guest was a rat!

Ree shared a video on Instagram showing what went down when the rat interrupted her show. The clip opens with Ree explaining how to dress up a bread bowl by brushing it with butter.

Then, the rat ran right past Ree’s kitchen island and scared her family members who were helping her film. Her daughter Alex’s fiancé (now-husband), Mauricio, was especially terrified!

Ree screamed as well, but only because everyone else was screaming. She didn’t even notice the rat at first!

But once Ree realized what was going on, she was just as jittery as everyone else. On top of the clip, she wrote “I don’t like rats. At all.”

Mauricio was talking about how huge the rat was, saying it was so big he mistook it for a rabbit!

Everyone then started teasing one other by screaming for no reason, just to make them think the rat had returned. It was hysterical!

Ree said this clip is just a snippet of what unfolded after the rat ran through her kitchen. She promised to showcase the whole ordeal on a then-upcoming episode of The Pioneer Woman.

“I consider myself a trailblazer on Food Network,” Ree said. “After all, I think I’m the only host on the network that’s had a large pack rat run through the kitchen in the middle of filming a cooking show. The (very) unwelcome visitor interrupted shooting, and the screams (not just mine—right, Mauricio?) were plentiful.”

Tune in below to see the hilarious clip. We don’t blame Ree, Mauricio, and the others for screaming at the sight of the rat…we would have had the same reaction!