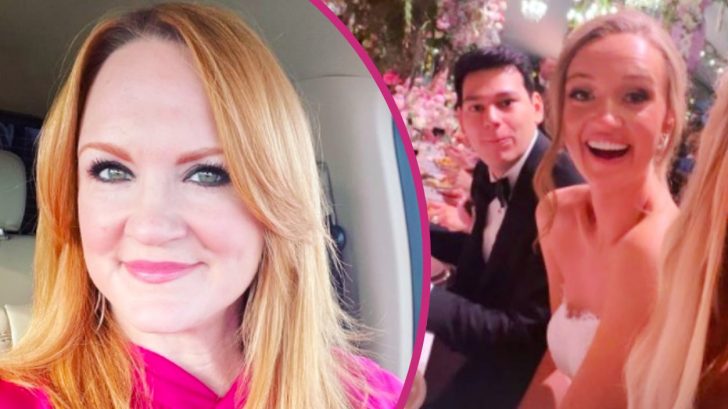 “Pioneer Woman” Ree Drummond‘s daughter, Alex, married Mauricio Scott on May 1. The couple was married outdoors on the Drummond family ranch while the reception was held under a white sail tent opened on all sides.

Ree’s followers have been enchanted by the many gorgeous photos that have emerged from Alex and Mauricio’s wedding day.

One of the photos shows Alex and Mauricio laughing as they reach forward to pet Fred, one of the Drummonds’ seven dogs. Since the dogs are such beloved members of their family, people assumed the pups were involved in Alex’s wedding.

But it turns out, they weren’t! Ree shared the image on social media, and in the caption, revealed that Fred and another one of her dogs actually “crashed” Alex’s wedding.

“My basset hounds crashed the wedding,” Ree said. “They heard the commotion and walked 1.8 miles down the road to the reception. Okay, bye.“

Ree commented back, “I can’t believe you captured this exact moment! This might be my favorite of all of your photos.”

Grant shared Ree’s post on his Instagram Story, and said he had “no idea” the Basset Hounds weren’t supposed to be at the wedding.

What a special moment! The pups just wanted to be part of the party!

Ree’s family has always loved Basset Hounds. Look below to see a video of her kids when they were much younger with one of their dogs, Charlie. Charlie passed away in 2017, but he lives on as the main character of many of Ree’s children’s books.

People were telling Ree she should write a new children’s book about the Basset Hounds crashing Alex’s wedding, and we agree!