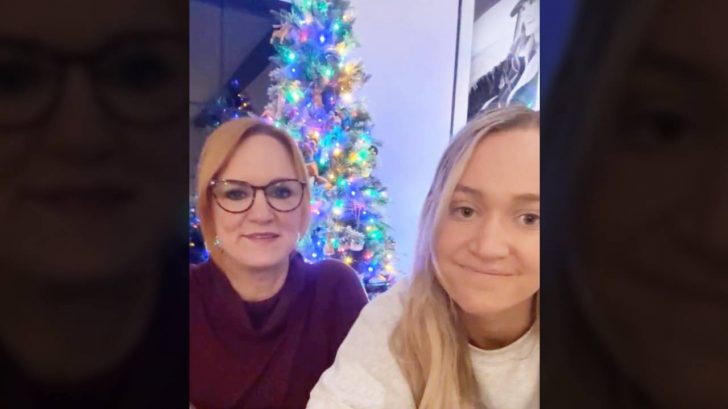 For many families, Christmas is all about tradition. You do the same things every single year – go to the same places and/or houses and see the same family members at each celebration. For the Drummond family, this is no different!

After the Christmas festivities had officially ended, Ree Drummond’s youngest daughter, Paige, took over her mom’s social media for an Instagram Live. Usually, Ree’s daughter Alex does these lives, but Paige took over because Alex was away from the family over Christmas for the firs time with her husband, Mauricio. Paige told Ree’s fans how they spent Christmas.

And of course, at each stop there was tons of food! Ree chimed in, saying, “We had approximately 18 meals in 24 hours,” and that included Paige’s favorite Christmas tradition, fried quail, biscuits, and gravy!

Everything went off without a hitch…well, that is, until they went to their annual Christmas Eve church service.

“Oh god, we have a church story,” Ree laughed, letting Paige tell the story about the major mishap.

Paige said, “For as long as we can remember, our Christmas Eve church service has started at 5:30 in our hometown,“ Paige said. “So I pull up and it’s 5:15 so I’m like, ‘Oh I’m gonna get in there a little early, it’ll be great. We’ll save our seats and stuff.'”

Turns out, it wasn’t great. Her brother, Todd, started running in the parking lot.

If you thought them being late was the only mishap, you’d be wrong.

“There are eight lessons for the Christmas Eve scriptures, and we get in there and they’re on the sixth lesson,” Paige said in the live video. “And Jamar was supposed to read one of the scripture lessons, one of the first few, and he didn’t make it.”

Oops! The Drummonds say everyone got a “good laugh” out of it and were able to cap the night off with another Christmas tradition: matching Christmas pajamas!

A post shared by The Pioneer Woman Magazine (@thepioneerwomanmag)