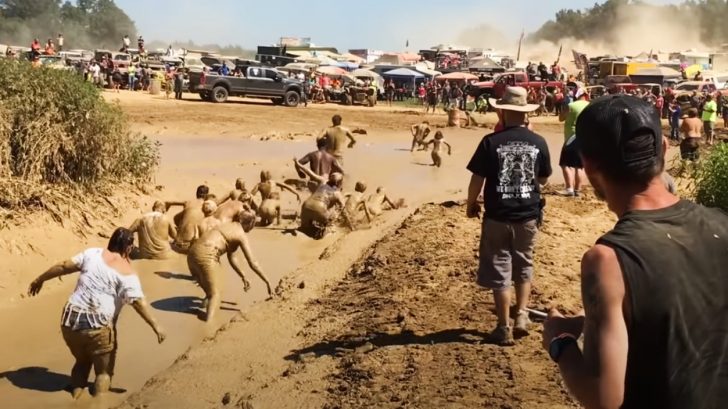 A popular festival in Kentucky descended into total chaos complete with drugs, booze, and some gruesome injuries including one man being impaled on a log. Nearly 50 people were arrested during the five-day event.

According to multiple sources including The Kentucky Herald-Leader, more than 10,000 people attended the festival which was held at Blue Holler Offroad Park in Edmonson County, Kentucky.

The event was held in 2020 as well and local Sheriff Shane Doyle told the newspaper that he expected problems this year as his staff became “overwhelmed” during the prior year’s festival.

‘Redneck Rave’ festival in Kentucky (of course) descends into chaos as 48 people are charged with various offenses ranging from drug trafficking to felony assault. Multiple others suffered serious injuries. Sheriffs were unable to break up the event, so decided to contain it. pic.twitter.com/Je7rlndSUo

A total of 48 people were arrested during the event after it became a grisly scene with several violent injuries.

One man’s throat was slashed by a friend after they had a drunken fight. The person who slit his friend’s throat had not been arrested as of Wednesday, June 23rd, 2021.

“They were intoxicated, they got into a fight, one of them slit the other one’s throat and then fled into the park,” Sheriff Doyle added.

Another incident saw a 29-year-old arrested after allegedly strangling a woman until she passed out. The cause of the altercation? A fight over a blanket.

The woman told police that she had blacked out from lack of oxygen and sustained scratches on her neck. She also says that she had handprints behind her ears from where he allegedly was choking her.

Furthermore, one man riding an off-road vehicle commonly called a “side-by-side” was impaled on a log after it broke through the floorboard.

“When it tried to come out through his back it was stopped by a steel plate behind his seat,” Doyle explained.

Emergency personnel actually could not remove the log from him before they evacuated him via helicopter to a local hospital.

Other injuries include a man whose finger was crushed after his vehicle slipped off a jack. He lost part of the finger that was damaged.

Lots of lacerations dislocated fingers, broken bones, and other injuries were noted by Doyle’s officers.

“There were so many intoxicated people, we just decided, ‘If dispatch sends an ambulance in, we’re sending a deputy in with them.’”

The slew of problems cost local taxpayers due to the massive amount of overtime and personnel required to handle the event.

“The people that live here, they don’t want this business here,” Doyle told the paper. “What we want are responsible businesses that add to the value of our communities. That business (Blue Holler Offroad Park) has the capability of being that. To date, it hasn’t always added value to the community. At times, it adds stress to the community.”

The event’s organizer, Justin Stowers, said that the event was “the coolest thing I’ve ever seen in my life.”

“With as many people and random things that popped up unexpectedly I feel like we all handled it very well. For the negative Nancy’s… we will put a complaint box by the porta johns next time for ya,” he said in a Facebook post.

The event featured camping, live music, a massive mudding pit, a huge football game, demolition derby, goldfish racing, and many other things for patrons to enjoy. Entry fees ranged between $50 and $250.