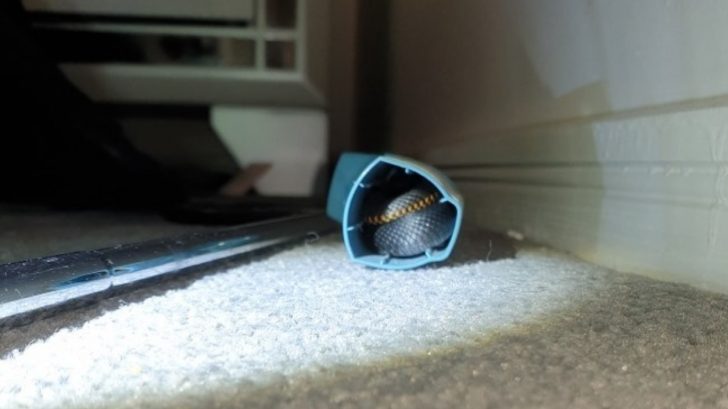 Sunshine Coast Snake Catchers 24/7 in Australia shared a photo on Facebook of a red-bellied black snake that had slithered inside a small child’s asthma inhaler.

Snake Catchers said a girl spotted the snake in Bli Bli, Australia after she took clothes off an outside clothesline and put them in a basket to bring inside. When she got into the home she laid the basket on the floor and noticed a “dark coloured” snake slithering out of the clothes.

She called the professionals and Heather of Sunshine Coast Snake Catchers was the first to arrive on the scene. When they went to look for the snake again they found it curled up inside the child’s asthma inhaler and took a picture of it.

“It’s one of the most incredible places we have ever found a snake before,” Stuart McKenzie of Sunshine Coast Snake Catchers told 9News. “I couldn’t imagine picking what it would be like picking it up and discovering it in there.”

Stuart says the snake was just a young juvenile exploring, seeking food and shelter because it gets a little cold this time of year. Stuart says you do not want to be bitten by a red-bellied because the symptoms are sweating, headache, diarrhea, and vomiting.

Watch a Video of Red-Bellied Black Snake Bite Below