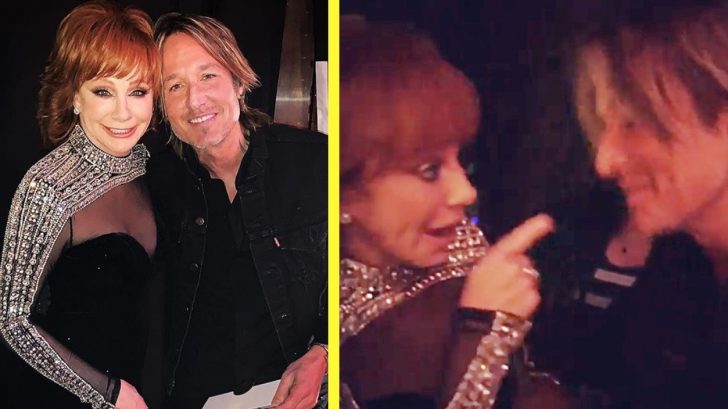 Behind the scenes at the 54th Annual ACM Awards, these two incredible country artists shared a special moment unlike any you will normally ever see on television. Unscripted, raw, and filled with emotion – this sweet encounter is one that reminds us just how great country artists are, and is a prime example of sweet Southern hospitality.

Reba McEntire, a 16-time ACM Award winner, took up hosting duties again this year and was on-hand for some of the biggest announcements of the night! For others, she was waiting quietly backstage and cheering for the well-deserved winner.

For Reba, hosting has become second nature to her. After all, she’s been the host for very close to 20 years. Because of this, she’s seen hundreds of folks be blessed with honors and accolades they not only dreamed of but worked tirelessly for.

Never-before-nominated, but often over-qualified, Keith Urban was the recipient of the night’s highest honor and crowned Entertainer Of The Year.

Watching this all unfold before her eyes, she could easily see how much this meant to him…and she knew how much he deserved it. Heck, she’d probably been rooting for him, too!

After his emotional speech and sweet moment with his beautiful wife, Nicole Kidman, Urban thanked the Academy and walked off toward backstage where Reba was waiting to congratulate him in her own special way.

What a great time we had in Las Vegas during the #acmawards! A little behind on my posting. I love looking at pictures. It helps me remember what fun we had even though it flew by! Thanks so much to my team.

Luckily for all of us, Reba’s very close friend and former “Reba” co-star Melissa Peterman was also standing backstage – and she was ready to capture it all on film!

Standing aside with Urban, Reba gave him the biggest congratulations ever.

“So happy!” Reba said pointing a finger at the Australian-born musician. “You know how much you’re loved! They were dying out there!”

Truthfully, they should have shown this sweet moment between an amazing legend and a man working toward legendary status on television…but thanks to the magic of the internet we all get to enjoy it now! Watch the full clip below.

When @keithurban won the ACM for Entertainer Of The Year, the room just exploded with cheers!! One of my favorite moments. Well deserved. Congratulations!! And one of the nicest guys around. @acmawards @reba #acmawards #keithurban