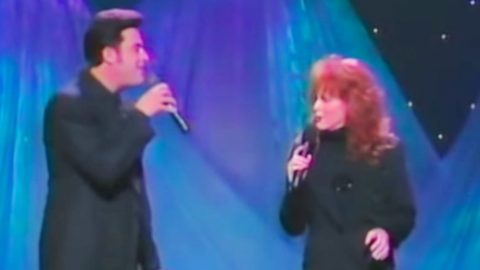 One Of The Best Duets

Whenever two country superstars get together for a duet, the result is nothing short of spectacular.

Such was the case in 1993, when Reba McEntire and Vince Gill released their first duet together, called “The Heart Won’t Lie.”

“The Heart Won’t Lie” was written by Kim Carnes and Donna Terry Weiss and was released as the second single off of McEntire’s album It’s Your Call in February 1993.

As McEntire told About Entertainment during an interview, the song was originally meant to be a duet between her and Kenny Rogers, but things didn’t work out.

“We could never get it to sound just right because of the different ranges of our voices,” McEntire said.

How Vince Came In

But later, when McEntire started work on a new album, she asked Rogers if she could record the song herself, and he gave it to her. At first, she asked Gill if he would like to sing the harmony part to the song, but her co-producer suggested a better way to utilize Gill’s talent.

“[He] suggested letting Vince do more than just sing harmony on the song, so he took a couple of verses, and we decided to turn it into a duet,” said McEntire.

Their decision paid off, because on April 10, 1993, the song hit number one on the charts. It remained in the top spot for a total of two weeks, and was on the chart 20 weeks overall.

A Tale Of Romance

During the Hot Country Jam at the Roy Acuff Theater in February 1994, McEntire and Gill brought their passionate duet to the stage, much to the crowd’s delight. McEntire started out on stage alone, before Gill came out and joined her, taking her hand in his.

At the end of the performance, the crowd gave McEntire and Gill a standing ovation, and once you watch it below, you’ll see why.

We could listen to this song over and over again!