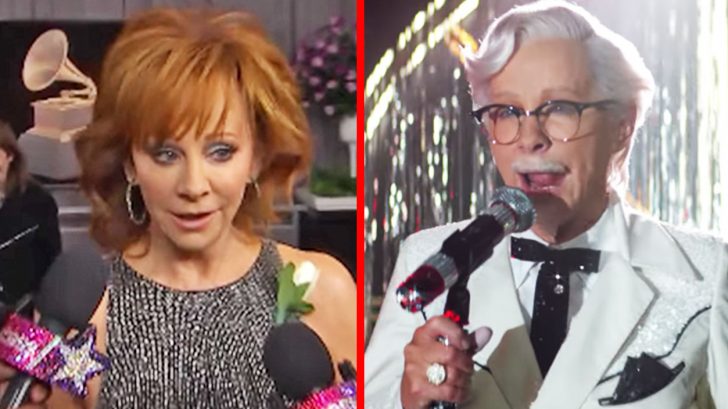 Over the past several years, KFC has enlisted some of the biggest male comedians and actors to rotate as the famous Colonel Sanders. Those names include Darrel Hammond, Norm McDonald, Jim Giffigan, Rob Riggle, George Hamilton, Rob Lowe, and Ray Liotta.

To help promote their Smoky Mountain BBQ fried chicken in 2018, KFC picked up the phone and called someone that would know their way around Southern flavor – country legend Reba McEntire. The singer teased her new role on Facebook on Jan. 25, 2018.

After accepting a Grammy Award for Best Roots Gospel Album a few days after the initial tease, the fiery redhead caught up with Access and spoke out about her latest iconic role – Colonel Sanders.

“When the phone call comes through, what do they say to you?” the Access reporter asked.

After a quick laugh, McEntire dove into the story saying, “So my manager Clarence Spaulding, he came to me and said, ‘Alright, they want you to be the first [female] Colonel for KFC.’ And I said, “No kidding!’“

After asking if she was even remotely interested, McEntire wholeheartedly told her manager, “Heck yes! Who wouldn’t want to be the first female Kentucky Fried Chicken Colonel?”

She revealed that she received a letter from the Colonel welcoming her to the family and that wearing a goatee and a mustache took a little getting used to.

“My goatee tickles a little bit. My goatee and my mustache,” she said with a laugh.

Hearing one of the most legendary female country singers say that her mustache and goatee were itchy isn’t something we ever thought we’d hear in our lifetime.

“I am a good lookin’ grey haired man,” she added.

Watch her portray a very good lookin’ man in the KFC commercials below.

And watch her interview on the Grammys red carpet below.