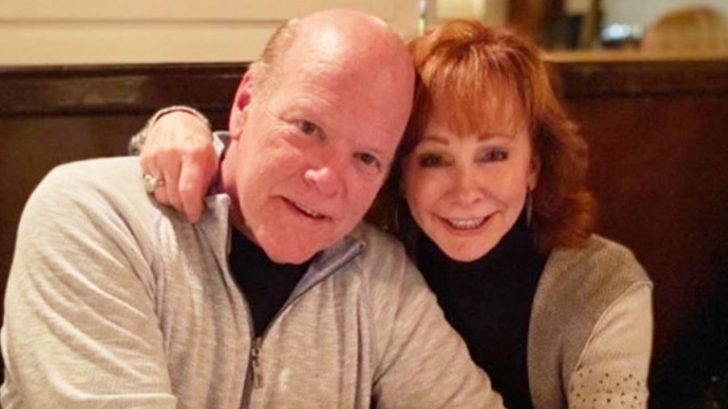 On an October 2020 episode of her podcast Living & Learning, Reba McEntire revealed that there is a new man in her life.

McEntire launched the podcast with her former Reba co-star Melissa Peterman a few weeks prior to the episode and they have interviewed guests including Dolly Parton, Lauren Alaina, and Jane Fonda.

Too cool!!! @melissapeterman and I are larger than life in #NYC! I hope y’all are enjoying our new @spotify original podcast, Living & Learning. Let us know what you’ve learned from the first two episodes. And if you’re in NYC, go take a picture with the billboard and tag us in it!

In their episode that dropped on Spotify, McEntire and Peterman spoke with Kristen Chenoweth and Mandy Len Catron about “the ins and outs of dating and relationships in the modern age.”

While speaking with her friends, McEntire revealed that she is dating actor Rex Linn. According to her, the two went out to dinner late-January and “then February on, it was the COVID pandemic, and we were talking, texting, FaceTime. And that’s a really good way to get to know people.”

The singer continued, “It’s good to have a person to talk to, laugh with, get into subjects about what’s going on. Discussions about our past, our family, funny stories, him being an actor, me being an actress. And he’s very into my music. I’m very into his career. It’s just great getting to talk to somebody who I find very interesting, very funny, very smart, and is interested in me, too.”

Peterman, who was at the dinner in January, told McEntire, “I think you guys are real cute together!”

Had a fantastic dinner with this Oklahoma girl. Tater Tots and Ketchup included. @reba

Linn has played Sgt. Frank Tripp on CSI: Miami since 2002, and also plays Kevin Wachtell on Better Call Saul as well as Principal Petersen on Young Sheldon. McEntire actually guest-starred on Young Sheldon earlier this year, and Peterman also has a recurring role on the series.

That could be how the pair met, but they also could have first met at 2019’s Western Heritage Awards. Linn emceed the event where McEntire’s father, world champion steer roper Clark McEntire, was inducted into the Hall of Great Westerners.

The McEntires had a great time on OKC helping to honor Daddy. He was inducted into the National Cowboy & Western Heritage Museum Hall of Great Westerners.

We love seeing Reba so happy. We wish them the best! You can listen to the podcast episode here.