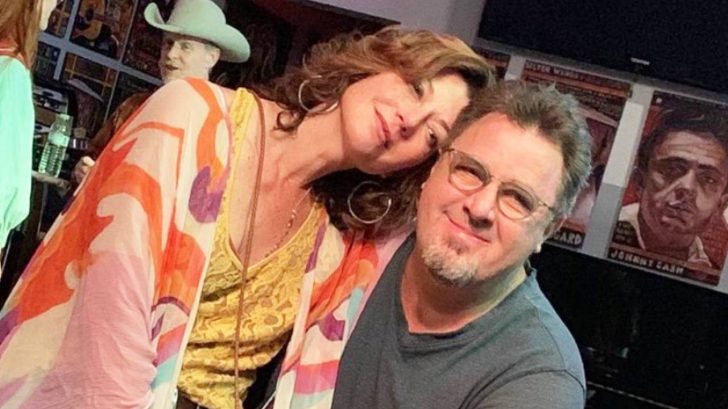 Gill’s eldest daughter, Jenny, also got on stage to tell a story about the kind of dad she has. When she was six years old, he actually turned down his first invitation to play the Grand Ole Opry because it was the same night as her talent show, which he had already agreed to play in.

Gill’s wife, Christian singer Amy Grant, was not in attendance because she is recovering from a bicycle accident which left her unconscious for 10-15 minutes. Even though she wasn’t in attendance, she still made sure her love for her husband was known!

A video was shown and her voice came on and said, “Hey my love. I’m so glad I get to add a couple of words to this night full of voices of people celebrating you and celebrating so much good talent in this town.”

His song “I Still Believe” played in the background of her voiceover, while photos of the two of them flashed across the screen. Grant’s voice continued:

“You know you’re not just a great songwriter, or a killer guitar player, an amazing singer — all those things are true, but Vince, what I love the most about you that I see at close range every day is you make music the same way you live life. You’re intentional and understated and you’re kind and true. And funny. You’re so easy to celebrate. And so have fun tonight. I love you so much and I’m so proud of you.”

After all the tributes, Gill took the stage to thank everyone and give his own speech. Watch that below.