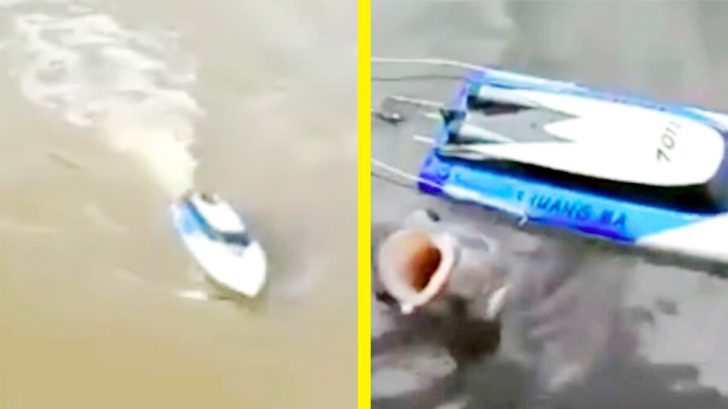 Most people think the only way to fish is with a rod and a hook, but they are terribly wrong. You can fish with a net, a spear, and even your own hands.

The latter technique, known as “noodling,” is a popular way to fish for catfish in the Southern U.S. A brave soul will stick their hand into a catfish hole in search of a monster catch, using their own hand and often their entire arm as the bait.

But as crazy as noodling is, we bet y’all have never seen a catch more wild than the one we’ve got here.

Just when you thought you had seen it all in terms of fishing videos, a clip making the rounds online showcases a unique, and surprisingly genius technique. All it involves is a little RC boat with a whole lot of power.

Why waste your hard-earned money on an expensive fishing boat when you can just drop a few bucks on a smaller, RC version? Plus, we bet there aren’t many big fishing boats out there that actually catch the fish for you.

Some genius somewhere figured out how to rig their RC boat to make it a self-sufficient fishing machine. All they did was attach a line, a hook, and maybe some bait to create the perfect RC fishing contraption.

After that, the boat was tossed into the water and let loose as its operator searched for a super catch.

Based on the size of the boat, you would think that it wouldn’t be capable of catching anything bigger than a minnow, or maybe a nice-sized goldfish. But hold on to your seats, because you’re about to be amazed by what this dinky contraption was able to reel in.

It Tugs Back A Monster Fish

After cruising around for just a short while, the boat had a bite. The operator started leading it back to shore, and it soon became clear that it was towing a big catch.

Sure enough, once the boat made its way back, it was revealed that it had just reeled in a monster of a fish!

That fish has to be twice the size of that boat, at least!

Now you can watch the wild catch as it happened by tuning in to the video below. How many of y’all are going to try out this fishing technique now?