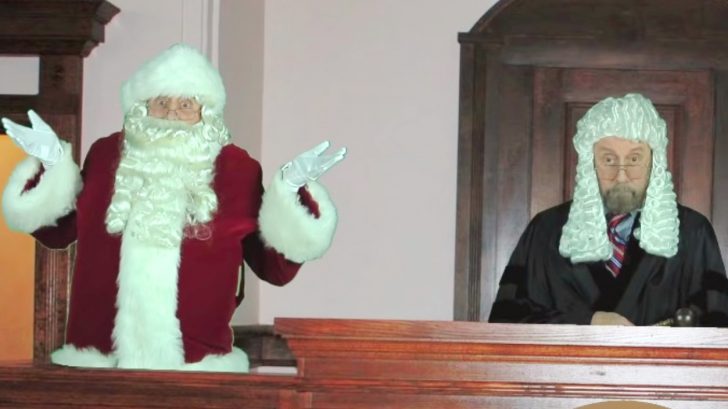 For years, Ray Stevens has been making country fans laugh with his comedic songs. We’re sure many of y’all have been left in stitches over his classic tunes such as “Gitarzan” and “Mississippi Squirrel Revival.”

But the most famous of Stevens’ funny hits is “The Streak,” which topped the all-genre Billboard Hot 100 chart and reached the third spot on the Hot Country Songs chart.

Keeping in tune with his signature style, Stevens has also brought his comedic touch to the holiday season.

Over time, Stevens has released two Christmas albums, with the first being 1997’s, Ray Stevens Christmas: Through a Different Window. The record contains a series of hilarious songs with equally hilarious titles.

Just a few tracks you’ll find on the album include “I Won’t Be Home for Christmas” and “Santa Claus Is Watchin’ You.”

Years after the album’s release, Stevens began filming and debuting music videos to go along with some of its tracks. One of the most popular videos he filmed was for the song “Redneck Christmas.”

Based on the title alone, and knowing Stevens’ style, you can bet that the video for “Redneck Christmas” is a rollicking redneck time. The video features Stevens as multiple characters, including a grandpa who turns the family outhouse into a sled.

But two years before Stevens was gliding around in an outhouse sled in “Redneck Christmas,” he was having a wild dream about Santa in the music video for another one of his comical Christmas tunes, “The Nightmare Before Christmas.”

The video opens with a pajama-clad Stevens appearing to have a bit of heartburn after eating too much fruit cake on Christmas Eve. In his fruitcake-induced state, he drifts off to sleep and ends up having a wild dream that Santa Claus was arrested.

Stevens plays multiple roles in this video as well, starring as himself, Santa, a witness, and a judge. Most of the video takes place in a courtroom setting, where Santa is placed on trial for a ridiculous set of crimes, including “cruelty to reindeer” and “over ten billion instances of unlawful entry.”

With the charges stacking up against him, it looked like poor Santa was never going to get off the hook. But in a surprising twist, the judge dismissed all of the charges, since Santa had visited his house to deliver gifts in the past.

At the end, Stevens wakes up from his fruitcake fever dream to find Santa in his house delivering presents and “ho-ho-hoing.” Relieved that Christmas wasn’t ruined, Stevens wraps up the wacky video by wishing everyone a merry holiday.

Get ready to laugh until it hurts when you watch Stevens’ video for “Nightmare Before Christmas” below. This has to be one of the most hysterical Christmas music videos ever made!