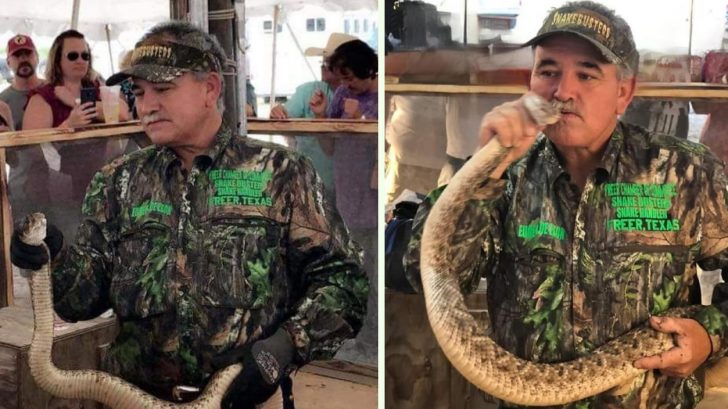 Legendary snake handler Eugene De Leon Sr. from Freer, Texas has officially passed after being fatally bitten by a rattlesnake in one of the city’s biggest events of the year.

Police said the incident took place at the city’s largest festival of the year, the Rattlesnake Roundup event that happens every year attracting incredibly talented musicians, great chefs, and some of the state’s most professional snake handlers.

Eugene was reportedly bitten in the shoulder around 1 p.m. while he was performing and handling rattlesnakes in front of a crowd, according to Freer Police Chief Hector Doria.

He was taken by helicopter to a hospital in Corpus Christi where doctors tried to save him but were unsuccessful.

The Freer Chamber of Commerce, who puts on the Rattlesnake Roundup each year released a public statement expressing their condolences to the family of Eugene.

The chamber wrote on Facebook, “The love and dedication he displayed for his community was witnessed everyday from being a member of the Freer Vol. Fire Department to being a call away for local residents to assist with removing snakes from their property. He was always ready to help. We will never forget his excitement during Roundup time, from doing interviews with television stations to appearing on televised Wildlife shows, he did it all. You showed all of us to follow our passion and give back to our community. May you Rest In Peace Eugene.”

According to his family, Eugene had over 20 years of experience handling snakes. The said it was his passion, the number one thing he loved doing.

More News On The Rattlesnake Handler Below