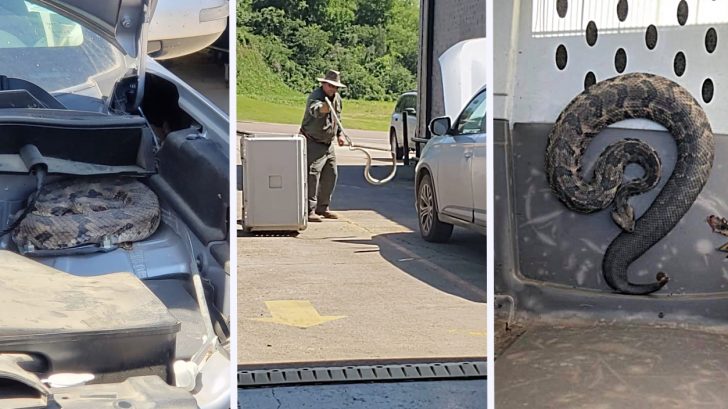 When Sadie Easom pulled into Mississippi Auto Direct in Natchez, Mississippi to get an oil change, she and the auto technician got the scare of their life after finding a 4-foot rattlesnake curled up under the hood.

It happened on Tuesday, April 14th, 2020. Technician Travis Bradley lifted up the hood to change the oil and saw the snake resting in the back corner on the driver’s side. The snake rode with Sadie all the way to the dealership while resting above her legs and feet.

He said it was the first time he had ever found a rattlesnake under the hood of someone’s car and it really shook him up. Travis notified his manager who contacted Randy Myers who is one of the most experienced animal control officers in the area to come remove the venomous snake from the vehicle.

“I have been on the job for eight years, and I have only come in contact with a couple of poisonous snakes in the city limits.” Randy said, according to Magnolia State Live. “I took the snake to a place where it would be safe (and released it).”

Sadie Easom jokingly said the experience took 10 years off of her life before leaving the dealership to return back to her home in Lake St. John, Louisiana. Not only did she leave with new oil in her car but a new and exciting story to tell her friends and family when she got home.

Excitement at MS Auto Direct. Who knew an oil change was so dramatic? (I'm standing outside super social distancing.)